For other uses, see Leather Armor.

"Fancy the leather armor, huh? Something to be said for going light."
―Hold Guard[src]

Leather Armor is a set of light armor found in The Elder Scrolls V: Skyrim.

It is made using leather strips and leather at a forge. Each gender's appearance of the armor is the same, with pauldrons, large decorative buckles, and a knee-length skirt.

This armor can be upgraded at a workbench with a piece of Leather, though does not benefit from any Smithing perks. 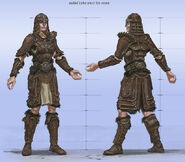 A Wood Elf wearing the unobtainable sleeveless leather armor in a loading screen.