Edit
watch 02:17
New Pokemon Games - The Loop
Do you like this video?
Play Sound

For other uses, see Legate Rikke.

"You're wrong. Ulfric. We need the Empire. Without it Skyrim will assuredly fall to the Dominion."
―Rikke[src]


Legate Rikke is the chief legate of the Imperial Legion under General Tullius. Rikke is a Nord, and believes strongly that Skyrim should be part of the Empire.

Rikke is with General Tullius in Castle Dour discussing concerns about Whiterun and Jarl Balgruuf the Greater joining their side in the Civil War before the Dragonborn speaks to her regarding joining the Legion, and she dispatches him to clear out Fort Hraggstad of the bandits occupying it so a detachment of Legionnaires can garrison it. Once done, she directs him to General Tullius to be administered the oath to join the Legion.

Rikke is present with Imperial soldiers, among them Hadvar, during the search for the Jagged Crown to acquire it before the Stormcloaks can for Galmar Stone-Fist.

Rikke leads the charge for the battle against the Stormcloaks composing of herself, Hadvar, Imperial Legionnaires, and Whiterun Hold Guards to protect Whiterun from being taken by Ulfric's Stormcloak soldiers and generals.

Rikke is at the Imperial Camp in The Pale to prepare for taking the hold back from Stormcloak control under Jarl Skald the Elder. To do so, she has the Dragonborn ambush a Stormcloak courier so she can falsify the documents the courier was carrying before having them delivered to the Stormcloak commander in Dawnstar, Frorkmar Banner-Torn.

The Battle for Fort Dunstad[]

With Frorkmar having been given the false information regarding Fort Dunstad, Rikke assigns the Dragonborn to attack the fort and wipe out the Stormcloak garrison so the Legion can take over. Once that is done, The Pale will be placed under Imperial control, with Legate Constantius Tituleius replacing Frorknar in Dawnstar.

Rikke then travels to the Imperial Camp in The Rift, with the intent to blackmail Jarl Laila Law-Giver's steward Anuriel to attain knowledge of a Stormcloak convoy full of weapons and gold that she then has the Dragonborn ambush alongside Hadvar and several other Legionnaires.

The Battle for Fort Greenwall[]

Having captured the convoy, Rikke orders the Dragonborn to assault Fort Greenwall, the main Stormcloak stronghold in The Rift protecting Riften, as it would allow for easier communication with the Imperial City back in Cyrodiil. Once the fort is taken, The Rift will fall under Imperial control, and Stormcloak commander Gonnar Oath-Giver will be replaced by Legate Fasendil at Mistveil Keep in Riften, while Laila will be replaced as Jarl by Maven Black-Briar.

Rikke is then at the Winterhold Imperial Camp, with the next target being the main Stormcloak stronghold in Winterhold, Fort Kastav, where several Legionnaires are being kept as Stormcloak prisoners of war. Sending the Dragonborn to sneak into the fort and free the prisoners, together with Hadvar and several other Legionnaires waiting to attack from outside in a pincer move, Rikke soon learns that the fort has capitulated, placing Winterhold under Imperial control, and replacing Stormcloak commander Kai Wet-Pommel with Legate Sevan Telendas in the capital Winterhold while Jarl Korir is removed from power as well.

The Battle for Fort Amol[]

Having reclaimed most of the Stormcloak-controlled holds, leaving only Eastmarch, which is Ulfric's home territory, Rikke sends troops from the Eastmarch Imperial Camp to take over Fort Amol, the main Stormcloak stronghold before the Legion can launch their attack on Windhelm. Once the fort is captured, the final assault on Windhelm can begin.

With the final battle to take out Ulfric and his Stormcloaks upon them, Rikke personally joins General Tullius as they lead the attack on Windhelm, before confronting Ulfric and Galmar in the Palace of the Kings, resulting in Galmar and Ulfric's deaths, and the end of the Civil War, placing Legate Hrollod in place of Yrsarald Thrice-Pierced, and Brunwulf Free-Winter as Jarl to replace Ulfric.

Rikke will join General Tullius and Jarl Elisif for the meeting at High Hrothgar between them and Ulfric with Galmar Stone-Fist. When reaching the point of which an exchange of holds between the two factions is discussed, Ulfric will want control of The Reach. The Dragonborn can choose to exchange it for The Rift, or one of the minor holds under Stormcloak control, though this leaves Rikke disappointed in the unfair trade if a minor hold is traded for The Reach.

The Battle for Fort Neugrad[]

Rikke will be at the Falkreath Imperial Camp if Falkreath was given to the Stormcloaks during the meeting at High Hrothgar, requesting that the Dragonborn join the Legionnaires for the assault on Fort Neugrad to reclaim it and the hold from Stormcloak control. Once that is done, Falkreath will be back under Imperial control, and Siddgeir will be reinstated as Jarl in place of Dengeir.

The Battle for Fort Sungard[]

If The Reach was given to the Stormcloaks during the meeting with The Greybeards, Rikke will be at the Reach Imperial Camp, requesting the Dragonborn assault Fort Sungard with her forces and place it back under Imperial control. Once the Stormcloak garrison is eliminated, The Reach will be back in Imperial hands, with Igmund reinstated as Jarl, removing Stormcloak sympathizer Thongvor Silver-Blood from the position.

The Battle for Fort Snowhawk[]

If Hjaalmarch was given to Ulfric during the negotiations at High Hrothgar, Rikke will be at the Hjaalmarch Imperial Camp, asking the Dragonborn to assist with taking the hold back from the Stormcloaks by attacking the garrison at Fort Snowhawk. Once the fort is cleared of Stormcloak rebels, Hjaalmarch will return to Imperial control and Idgrod Ravencrone will be restored to her position as Jarl.

If the Dragonborn sides with the Imperial Legion, Rikke acts as their commanding officer in the field, and assigns the Dragonborn to recapture several of the major holds. She, along with General Tullius, is present at the Imperial attack on Windhelm, and assists the Dragonborn in the final battle with Ulfric Stormcloak and Galmar Stone-Fist. She also attends the meeting at High Hrothgar when a truce becomes necessary so that the Dragonborn can capture Odahviing and then deal with Alduin once and for all.

If the Dragonborn sides with the Stormcloaks, Rikke is killed while defending Tullius during the Civil War in their final stand in Castle Dour in Solitude. Later, she can be encountered in Sovngarde, where she laments that the Legion wished to protect Skyrim, but only succeeded in killing men and women from both sides who are now being devoured by Alduin. She also laments that this has made her unable to find the way to Shor's Hall. Her coffin can be found in the Solitude Catacombs, along with General Tullius'.

Notice: These pieces of dialogue are only obtainable if the respective Holds were given to the Stormcloaks during the quest "Season Unending" 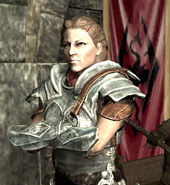 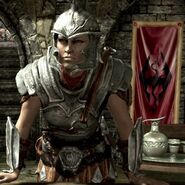 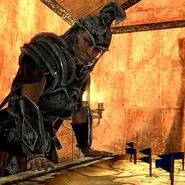