Legendary Dragons are the most powerful breed of dragon found in Skyrim. They are introduced in Dawnguard and typically appear throughout Skyrim at level 78+.

Unlike other breeds of dragon, legendary dragons have distinctive thick, curved horns. They have a black and purple scale color with white wings featuring mottled purple spots. They are also unique in having what appears to be compound eyes, formed of multiple "eyes" in a single socket.

The legendary dragon behaves like any other dragon in combat. It attacks with Fire or Frost Breath, and may sometimes land either on its own accord or because of the Dragonrend shout. Along with the Revered Dragon, it uses the Drain Vitality Shout.

Along with dragon bones, scales, gold, and gems, legendary dragons also have an additional chance to drop Daedric weapons and armor due to their high level. 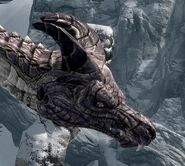 An up-close look at the compound eyes of a Legendary Dragon.

Deutsch Español Français Русский Українська
*Disclosure: Some of the links above are affiliate links, meaning, at no additional cost to you, Fandom will earn a commission if you click through and make a purchase. Community content is available under CC-BY-SA unless otherwise noted.
Advertisement