Prince
King
Lhotun is the former King of Sentinel. Lhotun was the fourth child of Queen Akorithi and King Camaron of Sentinel.

When the agent of Uriel Septim VII visited Sentinel, Lhotun asked him to uncover the rumored third prince of Sentinel in exchange for information on Lysandus' death. In a ruin, the agent found the remains of the third prince, Arthago. The third prince was Arthago, he had been left to die because of his frail body and to avoid future difficulty in the Sentinel Court.

Lhotun then told the agent that Lysandus had a secret lover, Medora Direnni. She had been banished by the dowager Queen Mynisera, and was also cursed by Nulfaga. In order to meet the sorceress, he told the agent, was to go to Direnni Tower and fight off the undead and daedric creatures.

After the death of Queen Akorithi, and his older brother and official heir to the throne of the Kingdom of Sentinel, Greklith, Lhotun took the throne and became the King of Sentinel. Slowly, he chased the murderers and dealt with them.

Prince of Sentinel. Lhotun is the third child of Queen Akorithi and the late King Cameron.[1]

Help Lhotun discover the fate of his lost brother.

"Welcome to Sentinel, Agent (Player name). I guess you must have received my letter. I know some things about Lysandus and why he might be haunting Daggerfall, but before I tell you, you have to promise to do something for me first. Is that all right?"

Yes "You will? Thank Arkay. You see, I used to have an older brother, ten or eleven years old than me, named Arthago (Or another name). Whenever I ask what happened to him, I'm told a different story. Some say he got sick and died, some say he was kidnapped by the Underking. I want to know the truth. If you can find some proof of what really happened to him, I'll tell you all I know about King Lysandus."
No "[?]"

After learning of the fate of the prince:

"This what I most feared. Poor Arthago (Or another name). As I promised, here's what I've heard about Lysandus I don't know how much of this is secret, but I trust you. Lysandus was in love with his court sorceress, a noblewoman named Medora Direnni, and during the war with us, his queen found out. They say that while her husband was gone, Queen Mynisera banished Medora from the court. My sister Aubk-i is queen now, part of the treaty to insure peace, but Mynisera still resides at Castle Daggerfall as the dowager Queen Mother. I don't know where Medora went, but I know she has an enormous castle somewhere on the Isle of Balfiera. But I also heard there is some kind of curse on her, and she can never leave. I don't know if that helps you, but that's all I know. Again, thank you for Arthago (Or another name)'s letter. Just knowing what happened will ease my heart somewhat. Please take this Claymore (Or another item) as a token of my appreciation." 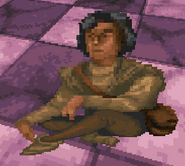 Full-body image of Lhotun
Add a photo to this gallery

Retrieved from "https://elderscrolls.fandom.com/wiki/Lhotun?oldid=3127883"
*Disclosure: Some of the links above are affiliate links, meaning, at no additional cost to you, Fandom will earn a commission if you click through and make a purchase. Community content is available under CC-BY-SA unless otherwise noted.