"You're passing through Solitude? Maybe you're looking to make some easy gold, yes?"
―Jaree-Ra[src]

Lights Out! is a quest available in The Elder Scrolls V: Skyrim. If the Dragonborn approaches Jaree-Ra in Solitude, he will state that he has a plan to rob an Imperial ship which will soon dock. He asks the Dragonborn to go to the Solitude Lighthouse and put out the fire there so that the ship will wreck on the nearby coast, then go talk to his sister Deeja. Unbeknownst to the Dragonborn, it is a setup that Jaree-Ra planned in order to attempt to kill the player, to avoid having to reward them.

Jaree-Ra on the Solitude docks has an offer for me.

Extinguish the fire in the Solitude Lighthouse[]

Go upstairs and activate the fire to put it out. The wreck of the Icerunner will then appear on the shore.

He will be down at the docks, next to the East Empire Company Warehouse. He will say that the work was well done, and that the ship wrecked near the coast just as he wished. The Dragonborn must go to the wreck of the Icerunner and speak to his sister, Deeja, to get a share of the loot.

She will be located in the hull of the ship. Go down to the bottom level where water is beginning to puddle, moving past the Blackblood Marauders. Despite Jaree-Ra's claim that the sailors would not be harmed, Deeja and the Blackblood Marauders have murdered everyone aboard the ship. The corpses of the sailors and the Imperial soldiers may be looted along the way. Deeja will first thank the Dragonborn for helping with the Solitude Lighthouse but suddenly state that you have earned a quick death, just before attacking. The note on her corpse will reveal where Jaree-Ra can be found.

It is optional to kill all the Blackblood Marauders before talking to Deeja, along with taking the loot now from their boat before the marauders leave the Icerunner with it, or later at the end of the quest chain. Taking it straight from the boat may count as stealing.

Deeja can be killed without speaking to her and the story will still progress, although there is the risk that the quest will not update ( PS3  ). When exiting the Icerunner it is clear that Deeja was indeed telling the truth about the loot already being gone. Only one Blackblood Marauder remains outside and all but one long boat gone.

Broken Oar Grotto can be found along the coast, northwest of the Solitude Lighthouse. Several beached longboats are clustered near the entrance. Blackblood Marauders patrol the grotto. Jaree-Ra will be on or near the large scaffolding in the area's center, guarded by more Marauders and Captain Hargar.

Killing Jaree-Ra completes the quest. After the fight, a key can be looted from his corpse that opens the Icerunner's loot chest. Despite Jaree-Ra's promise, there is no reward for this quest. However, there is plenty of loot in Broken Oar Grotto, including a random spellbook and 300–500 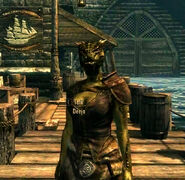 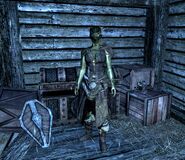 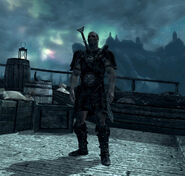 Deutsch Español Русский Українська
*Disclosure: Some of the links above are affiliate links, meaning, at no additional cost to you, Fandom will earn a commission if you click through and make a purchase. Community content is available under CC-BY-SA unless otherwise noted.
Advertisement