The origins of Lilmoth is largely unknown, but the general region, as well as, the city has ties to the beast-folk known as the Lilmothiit, a nomadic race of vulpine-men that were among the various races in Black Marsh. The race has ties to the Khajiit of Elsweyr, even the name of beastfolk derives from Ta'agra, the Khajiiti language. Lilmothiit means "one who is from Lilmoth," and since the city-state of Blackrose was originally a settlement built by the Lilmothiit, it implies that either the city or the general area, is the namesake of the Lilmothiit. The Lilmothiit had built the original settlement of Lilmoth, but as time went on, the fox-folk had lost their homes, as at one point, the city-states of Lilmoth and Blackrose had turned into cities of the Saxhleel, otherwise more commonly known as, the Argonians. Merchants and travelers overwhelmed the city, turning it into a prominent trading town.[3][4][5][6]

In 1E 2811, the Second Empire of Cyrodiil waged war with the Black Marshes, long before it was the province that is known to this day. It had begun with the borderlands, as it soon pushed into the regions of the inner marsh. Control over the Imperial Legion had shifted, as it did in 1E 2833 when Regulus Sardecus had passed away, and Lucinia Falco had assumed the mantle, revising the strategy for the Blackwater War. General Falco took to the seas, establishing the front along the coast, around the cities of Lilmoth and Archon. In conjunction with the Diamond Marines of the Imperial Legion, fought the countless bands of pirates found throughout this general area of the province, using the city-state of Gideon as her base of operations. Unlike her predecessors, Falco had split her armies, rather than using a single force against the versatile Argonians. In 1E 2837, the Blackwater War was over and the Second Empire claimed the province of Black Marsh as their own.[7][8]

During the Four Score War in 1E 2920, the city-state of Lilmoth was under the reign of Warchief Ulaqth, was among the leading forces in the Empire's front against the province of Morrowind. The Battle of Bodrum commenced on the 20th of First Seed, on the border township of Bodrum, within the Valus Mountains. The Crown Prince Juilek Cyrodiil was the commander of the conflict in general, alongside the Akaviri Potentate, Versidue Shaie. In the battle, Ulaqth was on the right flank, while the other notable figures were on the left. Despite the Emperor, Reman III, having a disdain for beastfolk, Juilek's forces were able to defeat the Dark Elves, pushing them back into Morrowind, at the fortress of Ald Marak. The conflict was over when the Empire was able to besiege Ald Marak, on account of shoddy espionage on the side of Vivec. At that point, Morrowind was under the control of the Second Empire, but when the Empire would fall without heirs, this eighty-year long conflict had existed for nothing.[9][10]

During the Interregnum around 2E 583, the city-state of Lilmoth was considered a part of the Ebonheart Pact, an alliance of the northeastern provinces with Eastern Skyrim and Morrowind. Lilmoth was ruled by a council of merchants that enforced order in their land, there was no central leader in Lilmoth, but many would respond to experienced folk like a retired Shadowscale, Sulahkeesh. Trade between the nearby Bright-Throat Tribe was steady. At this time, a group known as the Cyrodilic Collections had appeared in Lilmoth, bringing along various explorers from across the continent to part take in the archaeologist endeavors of Famia Mercius. An adventurer was one of these explorers, partaking in a quest with Mercius' group to the ruin of the Ixtaxh Xanmeer, where they recovered the Kajin-Jat Crystal. Ever since then, the Cyrodilic Collections had made their rounds throughout Murkmire, unfortunately getting involved with several indiscriminate groups such as the Dragonstar Caravan Company and the Blackguards, with the latter being the strongest criminal organization in Murkmire, ruling from the remains of Blackrose Prison. But eventually, the Collections was able to recover the Remnant of Argon, and restore the long forgotten Root-Whisper Tribe.[5][11][12][13]

In 3E 109, the city-state of Lilmoth was ruled by Queen Hellena, who was of Imperial-descent. Before her rise to power, the Argonian Priest-King was executed, in favor of Hellena. She was said to represent Imperial rule very well, which would have likely resulted in her marriage with Magnus Septim, son of the former Emperor, Pelagius Septim II. Magnus was an exponential leader. This occurred sometime around the War of the Isle, which took place on the other side of the continent. Magnus' rule of Lilmoth was prosperous, among his siblings, such as Cephorus I of Gilane, and Potema of Solitude. Hellena was a diplomat by nature, but because of her position in the backwaters of Lilmoth, she understood adversity and caution, and so both Magnus and Hellena were aware of Potema's wrath and ruthlessness, picking it up as far as 3E 120, a year before the coronation of the Empress, Kintyra Septim II. On that year, Potema Septim had declared war against the Empire, known as the War of the Red Diamond. Magnus Septim and the Kingdom of Lilmoth were at the forefront against the North.[14][15][16]

King Magnus Septim and his Army of Argonian Brigadiers fought against Queen Potema of Solitude, and her allies she mustered throughout the years, consisting of nations such as Ebonheart and Glenpoint. Magnus' forces, stationed at the ruins of Kogmenthist Castle, encountered Potema's warriors in what would become, the Battle of Falconstar. The battle commenced, sometime around the end of the Battle of Ichidag, where her only son, Uriel Septim III was defeated by Cephorus, and sent to the city-state of Gilane, awaiting trial. The Battle against Magnus and Lilmoth's forces was over, and it ended in victory, in favor of Potema and her right-hand, Lord Vhokken. By the time the Battle of Falconstar was over, it was revealed that Uriel III was killed in a riot and that Cephorus I was named the Emperor. Magnus' forces continued the fight, all the while into 3E 137 at the Siege of Solitude. In 3E 140, Cephorus I had passed away, and Magnus was named the Emperor. What happened to Lilmoth afterward is unknown.[17][18]

During the Imperial Simulacrum from 3E 389 to 3E 399, Emperor Uriel Septim VII was imprisoned along with Talin Warhaft in the Deadlands by Jagar Tharn. Tharn planned for months to capture the throne, and he was able to achieve so in ten years. Tharn had a powerful weapon called the Staff of Chaos, and he split it into nine pieces and scattered them across Tamriel, the staff was the only thing keeping Uriel Septim and Warhaft in Oblivion. A warrior escaped his clutches and traveled all corners of Tamriel to retrieve the missing pieces. The hero was known as the Eternal Champion, and he assembled the staff and defeated Jagar Tharn at the Imperial Palace. The Eternal Champion had at one point visited the city of Lilmoth in their quest to recover the pieces. The city of Lilmoth was under the rule of Queen Artomeda.[19]

The Slaughter of Lilmoth; The Umbriel Crisis[edit | edit source]

In 4E 6, the Argonians of the An-Xileel had risen into power, claiming the entire province of Black Marsh, under the banner of the An-Xileel. The city-state of Lilmoth was one of the cities that were brought into their control. Sometime later, the Hist of Lilmoth had gone awry, only talking to the An-Xileel and Argonians not considered "Lukiul," known in Jel as the Assimilated. All the while, strange reports had appeared on the Lilmoth Bay, of a floating island moving from the ocean, and towards the city-state of Lilmoth. This floating city was known as Umbriel and it first made their appearance known on the province of Black Marsh, beginning with Lilmoth and other nearby settlements. Sea creatures such as Dreugh emerged from the water, and even the Hist-controlled An-Xileel attacked the people, to which Umbriel would unleash moth-like creatures onto the land, enveloping dead bodies and turning them into undead creatures. Lilmoth was the first casualty in the Umbriel Crisis, which continued north into the Imperial City.[20][21] 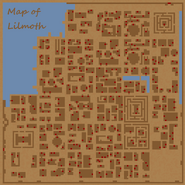 Notice: The following are unlicensed references. They are not copyrighted by a ZeniMax Media company, but can still be considered part of The Elder Scrolls lore and are included for completeness.
Retrieved from "https://elderscrolls.fandom.com/wiki/Lilmoth?oldid=3100181"
*Disclosure: Some of the links above are affiliate links, meaning, at no additional cost to you, Fandom will earn a commission if you click through and make a purchase. Community content is available under CC-BY-SA unless otherwise noted.