Not to be confused with Lilmoth.

The Lilmothiit are a mysterious, long-unseen beast race that are thought to be extinct. Their fate is unknown, and the only information on them is stated in the Pocket Guide to the Empire.[1]

Like the Khajiit and Argonians, they are humanoid in form, and animalian in appearance. Said to look vulpine, meaning fox-like.[1]

The Lilmothiit used to call Black Marsh their homeland, and founded the cities of Lilmoth and Blackrose, and lived along the southern coasts. It is not said why they left, some believe they were driven out by the Argonians, and many were forced to withdraw around Blackrose after Knahaten Flu in 2E 560. The Akaviri may have had interactions with the Lilmothiit, shown by the Akaviri using Lilmothiit ruins as grounds for prisons.[2][1] The Lilmothiit still lived in Blackrose around 2E 582.[3]

They are most likely related to Khajiit, as they are also a mammal-based race.[1]

Although little is known about Lilmothiit culture, what is known about them is that, like most beastfolk, they lived in a primitive, tribal society. It is also believed that the Lilmothiit were possibly nomadic.[1] 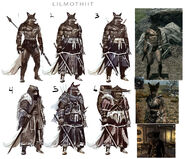 Unused The Elder Scrolls Online concept art.[4]
Add a photo to this gallery

Retrieved from "https://elderscrolls.fandom.com/wiki/Lilmothiit?oldid=3170176"
*Disclosure: Some of the links above are affiliate links, meaning, at no additional cost to you, Fandom will earn a commission if you click through and make a purchase. Community content is available under CC-BY-SA unless otherwise noted.