The Lion Guard are an elite knightly order of Bretons who serve High King Emeric in The Elder Scrolls Online.

They are responsible for Emeric adopting the lion as his personal crest, and thus the martial symbol of the Daggerfall Covenant. The Lion Guard have been deployed across High Rock by orders of the High King to protect the land, and battle against any and all that challenge the Covenant or threaten its citizens.[1]

A recruit may only rise in the Lion Guard's ranks through proven bravery and loyalty, and traits such as nobility, wealth, or charisma grant no prestige, without exception. Each recruit must demonstrate valor in battle, loyalty to High Rock, and courage and strength of character in the face of adversity.

Any recruits found in violation of the Lion Guard's strict standards are removed from the ranks without question. This is done to preserve their reputation as steadfast, trustworthy protectors of the highest martial skill. The Lion Guard only accept those who best exemplify their values, and wish to serve their people without question or hesitation. 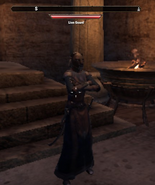 Español Italiano Русский
*Disclosure: Some of the links above are affiliate links, meaning, at no additional cost to you, Fandom will earn a commission if you click through and make a purchase. Community content is available under CC-BY-SA unless otherwise noted.
Advertisement