For other uses, see Lipsand Tarn.

Lipsand Tarn is a large Ayleid Ruin located deep in the Colovian Highlands in northwestern Cyrodiil. It is some distance north of Nonwyll Cavern, northeast of Cloud Top, north of Chorrol and west of Sancre Tor.

Lipsand Tarn is located on the crest of a high mountain range and easily be seen from some distance away.

The ruin is best approached from a mountain trail to the east up a set of once grand stone stairs leading to Lipsand Tarn's stone door. Approaching from the south is difficult due to the steep mountain side.

The ruin is occupied by various vampires and contains several traps. It also has the unique Elven Ceremonial Helmet in the large room where a button must be pushed to activate the stone stairs to continue further in.

This room is located to the right when coming down the first stone steps, under the structure. Inside are vampires waiting and there is a locked chest with various loot. Press the button and the stone stairs will rise.

When going in to the next room the wall will close when approaching the button to open the gate for entering the next level. This will also open a hidden room where an animal is guarding another button that opens the wall again so one can leave the room. Next level more vampires await and in the last room a locked chest with loot. 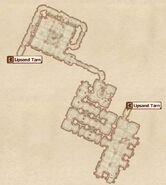 Button for the stone stairs
Add a photo to this gallery

Retrieved from "https://elderscrolls.fandom.com/wiki/Lipsand_Tarn_(Oblivion)?oldid=2466866"
Community content is available under CC-BY-SA unless otherwise noted.