A Lockpick is a tool used for picking the locks of doors and chests. It involves a mini-game where the player must line up the pins of the lock to open it. Effectiveness at using a lockpick is governed by the character's Security level.

Lockpicks can be bought from the Fences in the Thieves Guild or from the merchants in the Dark Brotherhood. Players who are not part of either faction but still rely on the Security skill will most easily obtain new lockpicks by raiding goblin or bandit mines. Lockpicks may also be purchased at any time via Shady Sam outside the Imperial City. There is a 10% chance of finding lockpicks as random loot, when the player is not in a cave, camp, or dungeon. 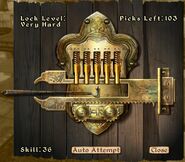 Lockpicking mini-game in progress
Add a photo to this gallery

Retrieved from "https://elderscrolls.fandom.com/wiki/Lockpick_(Oblivion)?oldid=2677468"
*Disclosure: Some of the links above are affiliate links, meaning, at no additional cost to you, Fandom will earn a commission if you click through and make a purchase. Community content is available under CC-BY-SA unless otherwise noted.