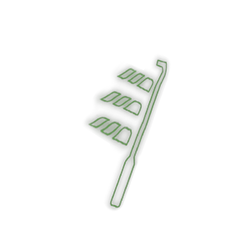 For other uses, see Lockpicking.

Lockpicking is a skill in The Elder Scrolls V: Skyrim and is one of the six skills that falls under The Thief skill-set.

"The art of Lockpicking is used to open locked doors and containers faster and with fewer broken lockpicks."
―In-game description

The lockpicking mechanic is more similar to the Fallout 3 system than the Security skill from Oblivion, except that the Dragonborn can attempt to pick a lock of any difficulty regardless of their skill level. To open locks, the Dragonborn must feel for the correct tumbler position with a lockpick while turning a tension wrench in the lock. Caution should be used, as the lockpick will break if too much pressure is applied while it is in the wrong position. The higher the level of the lock, the less pressure allowed before the pick breaks. Taking certain perks in this skill will widen the correct tumbler position for picks, making locks easier to open.

Lockpicking is also used to remove traps on items such as doors and containers. Said traps look like a wire leading down from the trapped object to the floor. Activating the wire engages the same lockpicking minigame as with locks. Note that objects in Skyrim can be locked or trapped, but never both.

"Go fiddling with any locks around here and we're going to have a real problem."
―Hold Guard[src]

Unlike many other skills, failure grants advancement. In fact, each time a lockpick is broken, the skill goes up an amount smaller than successfully picking the lock. One way to level the skill is to obtain a large number of picks and deliberately break them in a master lock.

The Dwemer Museum in Understone Keep contains many locked display cases to unlock. A high sneak level is recommended to avoid the guards in the museum, since entering the area is considered trespassing. The Jarl chambers also contain cases, most of which offer hard-to-pick locks.

The following books provide a permanent one-time increase to the Dragonborn's Lockpicking skill. See each book's page for a list of possible locations.

The following quests increase or help to increase the Lockpicking skill:

The following perks become available as the skill levels up:

Lockpicks are easily obtained, as almost all merchants carry at least one of them. Some of the easier ways are:

Console commands only function on PC versions of the game.