For the character in Legends, see Lord Naarifin (Legends).

Lord Naarifin was an Altmer general who commanded an Aldmeri army of the Third Aldmeri Dominion during the Great War.[1]

In 4E 171 Naarifin and his army invaded Cyrodiil from the south, by marching out of their hidden camps near the Elsweyr border, flanking Imperial forces near the border of Valenwood. Shortly after, his army conquered Leyawiin and was already besieging Bravil.[1]

By the end of 4E 172, Lord Naarifin's army had advanced to the walls of the Imperial City, while there were clashes between the Aldmeri Navy and Imperial Navy on Lake Rumare.[1] A year later the Imperial City was surrounded on nearly every side, with only the supply route to Bruma remaining open.[1]

In 4E 174 Lord Naarifin's army, now bolstered by Aldmeri reinforcements, took the Imperial City and started looting the city. Shortly after this, Lord Naarifin would begin working on a dread prophecy to bring about a Dominion victory, The Culling.[1][2] The Battle of the Red Ring, however, changed the course of action, Naarifin had almost completed the prophecy, but was defeated just in time to prevent the Culling from being completed.[1] Many rumors regarding his fate began to circulate, such as that Imperial forces hanged him from the top of the White-Gold Tower, in the Imperial City, where he stayed for thirty-three days. It is further rumored that a flying Daedra took his body away on the thirty-fourth day.[1]

"Well, well. The emperor himself. Come to – what? Duel me? You think you can stop me, is that it? Fool. Look around you! The Culling has begun. I will unleash the fires of Oblivion tonight – after I've added your body to the pyre!"
―Lord Naarifin[src]

However, Lord Naarifin was defeated in combat by an unknown hero wearing the Emperor's armor, whom he had met before. When he was defeated, he was actually drawn into an unknown plane of Oblivion.[2] 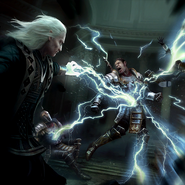 Lord Naarifin, killing members of the Imperial Watch in the White-Gold Tower 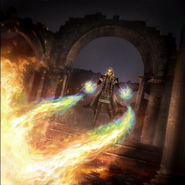 One of Naarifin's Elite bodyguards.
Add a photo to this gallery

Retrieved from "https://elderscrolls.fandom.com/wiki/Lord_Naarifin?oldid=3081308"
*Disclosure: Some of the links above are affiliate links, meaning, at no additional cost to you, Fandom will earn a commission if you click through and make a purchase. Community content is available under CC-BY-SA unless otherwise noted.