000727DF
Luna Moth Wing is an ingredient in The Elder Scrolls V: Skyrim. It can be used to make potions at an alchemy lab as part of alchemy.

"As with the dragonflies, I was taken aback by the number of butterflies, moths, and other insects that manage to thrive in Skyrim. The Luna moth is especially beautiful; its thin, almost ephemeral wings seem too delicate to hoist anything into the air, giving them an almost magical appearance. Indeed, that sense extends to the properties they exhibit when crushed and distilled (an action I admit was difficult to perform at first, no matter my resolve to discover all that Skyrim has to offer. These creatures are simply that beautiful!) While they can be used for creating poisons that damage magicka, I feel that would be a waste of their potential. Do not be alarmed if, when the wings are broken down almost completely, they appear to almost disappear under your mortar. That very quality makes the wings quite effective in potions of invisibility!"
―Agneta Falia, Herbalist's Guide to Skyrim

Luna Moths are nocturnal creatures, and only appear at nighttime intervals between eight and eleven o'clock. They can be found along roadsides, often near trees or rocks, and can be hard to detect when they land. Groups of three insects spawn, each a random assortment of Luna Moths and the easier-to-spot Torchbugs. If collected these groups often respawn fairly quickly once the player moves away collecting other groups. Many can be found along the road just east of Whiterun, and in the fields around Whitewatch Tower.   A very good place to find them is at the camp site about halfway between Blue Palace and the abandoned shack to the southeast. Just north of Talking Stone Camp along the river are both Torchbugs and Luna Moth Wings. One may also find some to the north-east of Morthal near piles of rocks with a few torchbugs leading to Movarth's Lair. Additionally, Luna Moths (along with Torchbugs) spawn at Shadowgreen Cavern, northwest of Solitude. 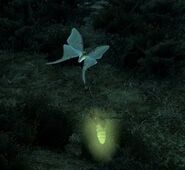 Retrieved from "https://elderscrolls.fandom.com/wiki/Luna_Moth_Wing?oldid=3123853"
*Disclosure: Some of the links above are affiliate links, meaning, at no additional cost to you, Fandom will earn a commission if you click through and make a purchase. Community content is available under CC-BY-SA unless otherwise noted.