Not to be confused with Lurker.

"They are abominations of the Bloodthorns! The Lurchers were Spriggans once, until the cultists twisted and corrupted them"
―Wyress Ileana[src]

Lurchers are creatures that appear in The Elder Scrolls Online. Lurchers are a more masculine variant of Spriggan, and are often like so due to being cursed. Natural Lurchers can be found within swamps and forests and are sometimes used as guardians.[source?]

Killing these creatures contributes to the Slayer of Nature achievement. 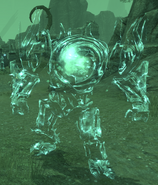 Nature Realm form
Add a photo to this gallery

Retrieved from "https://elderscrolls.fandom.com/wiki/Lurcher?oldid=2922262"
Community content is available under CC-BY-SA unless otherwise noted.