Mage's Trick is an action card in The Elder Scrolls: Legends that is a part of the Heroes of Skyrim expansion.

Mage's Trick can be purchased as part of the Ancano's Cunning deck or purchased alone for 100 soul gems.

Due to its low damage, Mage's Trick is not especially useful for killing creatures. The best way to use it is to either kill creatures with powerful abilities, like Lethal, that have low health, or, if you are in dire need of a card, to damage your opponent and draw a card. 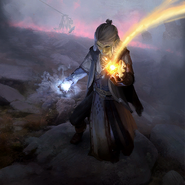 Retrieved from "https://elderscrolls.fandom.com/wiki/Mage%27s_Trick?oldid=2856151"
Community content is available under CC-BY-SA unless otherwise noted.