For other uses, see Mage.

Preferring to use their extensive knowledge of Magic, Mages wield a might as powerful as the sharpest blade or the deadliest mace. Mages spend many years studying schools of the arcane arts, leaving behind most other pursuits. Depending on their magical abilities for offensive and defensive power, mages are typically lacking in armor or shields and utilize limited to no physical weaponry.

Destruction is used to create elemental attacks, thus being used as an offensive form of magic to defeat foes. It is almost essential to any mage that plays an offensive role. Generally, destruction magic is split into three types of spells: fire, frost, and shock.

Conjuration is used to summon powerful creatures and weapons from the planes of Oblivion. It may also be used to raise the dead and steal souls of the living as they die.

Restoration magic is focused on creating and harnessing life force, thus it is commonly used for healing wounds. It also has spells called Wards, which can be used to reduce the damage inflicted by enemy spells, just like a shield would block an enemy blow. Restoration also has a series of spells used to turn and/or even harm the undead.

Illusion involves manipulating the mind of the enemy. This school of magic involves spells like Fury, Fear, Calm, Muffle and Invisibility. 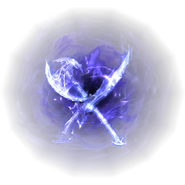