For other uses, see Mages Guild.

"The Mages Guild is the center of magical study for all those of spell casting potential. They perform many services to those who have the money to pay including, selling potions, selling magical items, helping mages create spells, and selling spells for spellbooks. They are a powerful force in the world of Tamriel, often searching for lost artifacts or treasures. It is said by some that the Mages Guilds have many secrets, including the location of some legendary places."
―Description in Arena manual.[src]

The Mages Guild is an institution dedicated to the research and study of magic. In The Elder Scrolls: Arena, spells are learned and researched here. The Mages Guild also acts as a merchant, buying and selling magical items and identifying found magical items.

The Mages Guild is one of many possible factions the Eternal Champion may encounter as a part of procedurally generated side quests. Unlike later games in the series, it is not possible to join them.

The outside of many Mages Guild buildings has a hedge with an ornate archway leading into a grassy courtyard. The side and back walls are patterned with the distinguishing teal bricks and gold-colored windows. Others are more simple structures, marked only by a sign with the Eye of Horus.

In the Guild building, there is only one mage, dressed in blue robes decorated with white stars a pointed mage hat of the same texture and a sparking staff in the left hand. The services provided by the guild depends on the player's class: Warriors and Thieves except Bards may only buy potions and pay for investigating the enchantment of found artifacts, while Bards and Mage classes can also learn spells if paid the required amount of gold.

When the Eternal Champion is attacked by a member of this faction, one of the following messages will play, changing depending on the form the encounter has taken:

A mage inside the Mages Guild. 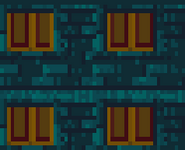 Wall pattern on the sides of the Mages Guild. 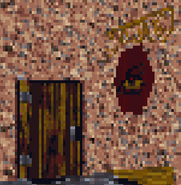 Alternate front view as seen in Rihad.
Add a photo to this gallery

Retrieved from "https://elderscrolls.fandom.com/wiki/Mages_Guild_(Arena)?oldid=2961530"
*Disclosure: Some of the links above are affiliate links, meaning, at no additional cost to you, Fandom will earn a commission if you click through and make a purchase. Community content is available under CC-BY-SA unless otherwise noted.