Malabal Tor is the northwestern zone of Valenwood in The Elder Scrolls Online. It is the deepest heart of the province, where little light reaches the forest floor. The region is dotted by many ancient ruins and Wood Orc settlements. Three major cities are located in this region: the legendary city of Silvenar, the Baandari Trading Post, and Velyn Harbor. The Xylo River runs through this region.

"Malabal Tor is the northwest region of Valenwood, on the coast of the Abecean Sea and the Strid River estuary. Its capital is Silvenar, the spiritual home of all Wood Elves."
―Loading screen[src]

The capital of Malabal Tor is Silvenar which is considered to be the spiritual home of all Bosmer,[1] and serves as the seat of power for the Silvenar, the "Voice of the People" of Valenwood.[2] In the thickness of the region's jungle, where little light penetrates the trees, Bosmer hunters climb to the tops of the trees to see the stars in the night sky.[3]

In the summer season, the walking tree city of Falinesti travels to the Summer Site.[4] While most of the population of Malabal Tor are Bosmer, the Khajiit and Orsimer (Wood Orcs) also have a presence in the region at the Baandari Trading Post[5] and Dra'bul,[6] respectively. The Maormer had also situated themselves on the coastal Tempest Island and battled the Aldmeri Dominion and Undaunted there.[7]

The following are locations accessible in Malabal Tor and, with the exception of unmarked locations, are discoverable on the map. Points of Interest serve as locations with unique side quests, while cities serve as the centralised areas with multiple sublocations and act as a hub for services and merchants. Explanations of the types of locations are provided in the main locations page.

Sixteen Skyshards can be found in Malabal Tor totalling in five skill points with one left over. The zone guide provides clues as to the location of each Skyshard, but many can be found simply by exploring and watching for the distinctive pillar of light they emit.

Thirty-one books that are a part of Shalidor's Library can be found in Malabal Tor and added to the collection. Books that have already been found in other zones will already be marked as completed in the zone tracker. 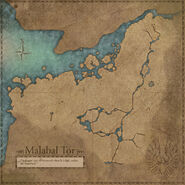 A map of Malabal Tor.

Notice: The following are unlicensed references. They are not copyrighted by a ZeniMax Media company, but can still be considered part of The Elder Scrolls lore and are included for completeness.
Dansk Deutsch Español Français Polski Русский Svenska
*Disclosure: Some of the links above are affiliate links, meaning, at no additional cost to you, Fandom will earn a commission if you click through and make a purchase. Community content is available under CC-BY-SA unless otherwise noted.
Advertisement