"Who are you to challenge me? I have conquered mortality itself. I've spat in the eyes of the Daedric Lords. This is my realm now. I've sacrificed too much to let you take it from me!"
―Malyn Varen[src]

Malyn Varen is a Dunmer mage located within Azura's Star. He is the primary antagonist of the quest "The Black Star."

Years ago, Malyn was exiled from the College of Winterhold for pursuing controversial research with Soul Gems, killing a student, and many other unacceptable experiments. He sought to find a way to become immortal, and he believed that storing his soul in Azura's Star would prevent him from dying. The problem with this is that one of the properties of the star is that no humanoid soul could enter.

According to Nelacar, the further Malyn progressed towards his goal, the more Azura cursed him. The Daedric artifact drove Malyn insane, causing him to hallucinate: he "heard voices" that were not there, saw people that were not there, and eventually, even murdered one of his students. For this, he was expelled, whereupon he gathered a band of followers, and continued his research at Ilinalta's Deep, an abandoned Imperial outpost that collapsed into the lake due to earlier experiments by Malyn and his accomplices.

There, he sought to capture his own soul in the Star to achieve a state of immortality. He achieved this goal to some extent, however he must continually be "fed" souls from the outside world to continue his state of existence. This was the purpose of the necromancers stationed in the sunken outpost, and the appearance of so many skeletons within suggest they had been doing it for quite some time.

The Dragonborn finds Azura's Star beside Malyn's skeleton at Ilinalta's Deep, and with the help of Azura, purifies it by entering it and purging Malyn's soul.

Alternatively, the Dragonborn may have brought the Star to Nelacar and had him perform the purification, which causes the Star to turn black and trap black souls within it, similar to a Black Soul Gem.

Even when the star is cleansed however, an unknown adversary sends two apprentice necromancers to hunt down the Dragonborn and reclaim Azura's Star.

The staff and dagger that Malyn wield are leveled and random. Occasionally throughout the fight, he switches to casting Oakflesh.

Fighting alongside him are three Dremora. While the Dremoras' fire spells do a lot of damage, and make them hard to see, they are not difficult to drain and kill if they are approached enough. As long as the Dragonborn has good fire shielding and/or a lot of health potions, the battle can be fought long enough to kill them. Using a full strength Slow Time shout while he is attempting to run away after the initial conversation allows him to be easily defeated.

For a magic-based character, a Dovahkiin sufficiently skilled in Conjuration can summon a pair of Storm Atronachs or Thralls, whose attacks can easily drain the Dremora's magicka, rendering them vulnerable to melee attacks.

As for thief-type characters, with a high enough Sneak skill, even without the Shadow Warrior Perk, it is possible to stay crouching behind a crystal pillar, out of view of Malyn and the Dremora, and become hidden again, and backstab all four of them, by sneaking up on each of them individually. This is best done with the Mehrune's Razor, a set of Ancient Shrouded Armor, and, if the player is an Orsimer, the Berserker power active. The Dragonborn must also have unlocked Assassin's Blade to achieve the maximum damage.

Three Daedra Hearts can be collected once the Dremora have been slain, but only if their corpses were not knocked off the edges of the crystalline floor during battle. They also carry leveled (possibly difficulty dependent if not random) one and two-handed weaponry. A way to even the odds is to dual-wield the Staff of Magnus with a Staff of Sparks, draining their health and magical capabilities simultaenously.

Malyn can be resurrected using the Dead Thrall Conjuration spell. He will not initially follow the Dragonborn out of the Azura Star, but he later reappears after fast-traveling.

"Ah, my disciples have sent me a fresh soul. Good. I was getting... hungry. Wait. There's something different about you."

You can't escape your fate, Malyn.
This experiment of yours is over!
"And who are you to challenge me? I have conquered mortality itself. I've spat in the eyes of the Daedric Lords. This is my realm now. I've sacrificed too much to let you take it from me!" 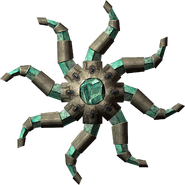 Malyn Varen's Skeleton found in Ilinalta's Deep.
Add a photo to this gallery

Retrieved from "https://elderscrolls.fandom.com/wiki/Malyn_Varen?oldid=3054577"
*Disclosure: Some of the links above are affiliate links, meaning, at no additional cost to you, Fandom will earn a commission if you click through and make a purchase. Community content is available under CC-BY-SA unless otherwise noted.