For other uses, see Mamaea.
Not to be confused with Mamaea's Yurt or Yamaea.

Mamaea is a cavern complex located in the West Gash region, southeast of Gnisis found in The Elder Scrolls III: Morrowind.

The entrance is directly west of Dushariran, with the entrance set into the eastern side of a hill. The large cave complex is inhabited by Sixth House worshipers, it is guarded by Dreamers and Ash Creatures. The complex is split into three sections: Sanctum of Awakening, Sanctum of Black Hope, and Shrine of Pitted Dreams. 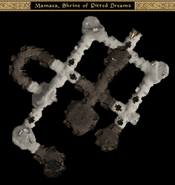 Zula
Add a photo to this gallery

Retrieved from "https://elderscrolls.fandom.com/wiki/Mamaea_(Location)?oldid=2929428"
*Disclosure: Some of the links above are affiliate links, meaning, at no additional cost to you, Fandom will earn a commission if you click through and make a purchase. Community content is available under CC-BY-SA unless otherwise noted.