The Mane is the formal title given to the nonpartisan spiritual leader and ruler of Elsweyr and the Khajiit people.[1][2] Sometimes, they are successful in bringing temporary peace to the province; however, this does not last very long.[2] Historically, the Mane has been known to reside in the city-state of Torval, where he is protected by his Warrior Guard.[1]

Khajiit tradition holds that only one Mane can be alive at any one time and that there is only one Mane, who is simply reborn in different bodies.[1] Twins Khali and Shazah were born as twins during the alignment of the moons, making them both Lunar Champions. They had to compete with each other to become the new Mane.[3]

A Mane can be born only under a rare alignment of the moons Masser and Secunda when, according to legend, a third moon appears in the sky. In ancient times, the Khajiit would shave off their own manes in deference to the Mane, braiding them into locks that he would incorporate into his own, gigantic mane. Over time, as the population of the region grew, this ritual became impractical.[1]

Now, while all Khajiit still remove their manes, they do so largely as a symbolic sacrifice. The current Mane still wears the hair-locks and braids of his own tribe as well as those of his Warrior Guard, which encompasses hundreds of Khajiit. He is so weighted down by the hair of his kinsmen that he cannot move without aid, and often travels about the countryside by means of a palanquin.[1] 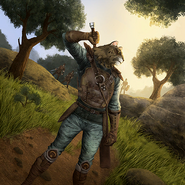 Protector of the Mane card art in Legends.

Notice: The following are unlicensed references. They are not copyrighted by a ZeniMax Media company, but can still be considered part of The Elder Scrolls lore and are included for completeness.
Español Italiano Polski Русский
*Disclosure: Some of the links above are affiliate links, meaning, at no additional cost to you, Fandom will earn a commission if you click through and make a purchase. Community content is available under CC-BY-SA unless otherwise noted.
Advertisement