For this character in other games, see Mannimarco.

Lord Mannimarco is an Altmer Necromancer and Molag Bal's main agent on Tamriel in The Elder Scrolls Online.[1]

Once one of the original Five Companions, Mannimarco tricked them into using the Amulet of Kings in a ritual that caused a Soulburst, which would weaken boundaries between Nirn and Oblivion enough to allow Molag Bal's followers to use the Dark Anchors to try and merge Nirn into Coldharbour in an event known as a Planemeld. He worked with the Chancellor of the Elder Council, Abnur Tharn, toward this very goal.

In reality, Mannimarco had no intention of reamaining Molag Bal's servant. He intended to use the Amulet of Kings to trap the Daedric Prince and absorb his essence over time, essentially taking his place as the Lord of Brutality and Domination. To this end, he required the Amulet of Kings.

After the Soulburst ritual, Sai Sahan fled the Imperial City with the Amulet and his it in the catacombs of Sancre Tor. He was captured shortly after and sent to the Halls of Torment in Coldharbour, where the Duchess of Anguish tortured him mentally and physically for years. During this time, Mannimarco placed an enchantment upon Sahan in the event he ever escaped. This proved wise, as the Vestige was able to rescue him.

Mannimarco was eventually betrayed by Abnur Tharn, who was rescued from the Castle of the Worm by the Vestige and Lyris Titanborn. The two mages fought a magic duel which Mannimarco lost when the Vestige struck him from behind, breaking his concentration and allowing them to escape.

During Sahan's torture, Mannimarco learned that Sai would require the Ring of Stendarr's Mercy to retrieve the Amulet from its hiding place. The King of Worms dispatched a Daedric Titan to the ring's location, the Abbey of Blades in Hammerfell. The Vestige, Lyris Titanborn, Abnur Tharn and Sai Sahan arrived shortly after and were able to dispatch the beast, though not before is destroyed most of the abbey and killed most of the students. The leader of the abbey, Kasura, had hid the ring in the nearby catacombs which housed the remains of Sai's ancestors. Mannimarco appeared in the catacombs and raised the dead within in an attempt to stop the Vestige, to no avail.

Mannimarco continued to monitor Sai's movements through his enchantment. Eventually the Five Companions went to Sancre Tor to retrieve the Amulet, and the King of Worms travelled there himself and revealed his plan for Molag Bal to them, explaining that the wards of Stendarr Sai had placed on the chamber containing the Amulet would hide him from Molag Bal's sight until he was ready to strike. Mannimarco then tried to slay them by resurrecting the dead within. The Vestige was able to confront Mannimarco and kill him, yet his spirit survived and promised death would not slow him for long.

At that moment, Molag Bal appeared in Sancre Tor and seized Mannimarco's spirit, revealing he had known of his impending betrayal and dragged him screaming into Coldharbour. There he was tortured relentlessly by undead in Heart's Grief, the seat of Molag Bal's power in Coldharbour.

When the Five Companions arrived in Heart's Grief to perform the ritual with the Amulet of Kings, they found Mannimarco magically shackled to a stone table. The Vestige is then given the choice to free him or leave him to his grim fate.

If he is freed, Mannimarco vanishes from Coldharbour, claiming future generations would curse the Vestige for their decision. 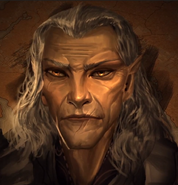 Mannimarco in "Siege" trailer
Add a photo to this gallery

Retrieved from "https://elderscrolls.fandom.com/wiki/Mannimarco_(Online)?oldid=1479773"
*Disclosure: Some of the links above are affiliate links, meaning, at no additional cost to you, Fandom will earn a commission if you click through and make a purchase. Community content is available under CC-BY-SA unless otherwise noted.