"The Maormer are native to the island kingdom of Pyandonea, an archipelago in the southern ocean. Their ruler, King Orgnum, is said to be immortal."
―Serpent's Grotto loading screen[src]

The Maormer, also known as Tropical Elves,[1] Sea Elves,[2] Fish Elves,[2] or Pyandoneans,[3] are a race of Mer that live on the continent Pyandonea, far south of the Summerset Isles,[1] after migrating there from the legendary continent Aldmeris as Aldmer in the Merethic Era.

Maormer are especially distinguished by their skin and eyes. Their eyes are clear and milky-white.[3] Maormer's skin is entirely pale and colorless, as though their flesh is made of white limpid jelly. Their skin also has strange, chameleon-like properties, comparable to that of the forest coupling skills of the Wood Elves.

King Orgnum is the Maormer ruler of Pyandonea. Orgnum is a deathless wizard who it seems is not only immortal, but grows more youthful by the century,[1][4] and he is said to be the Serpent God Satakal.[1] The Maormer practice a powerful form of snake magic, and with this they have tamed the sea serpents of their island for use as steeds and warbeasts.[1] These sea serpents serve as King Orgnum's guards and occasional mounts.[4]

Maormeri ships are described as insectoid in appearance, with membranous sails and a rugged chitin hull, flying a markedly alien flag.[3] Waving tendrils of kelp trap all but the Maormer's own ships in the uncharted waters of Pyandonea.[4]

"Like the High Elves, the Sea Elves also came from Old Aldmeris. But where the Altmer settled in the paradise of Summerset, the Maormer ended up in low, marshy, and insect-infested Pyandonea—and the Sea Elves have never forgiven the High Elves for it."
―Stormwarden Undercroft Loading Screen[src]

Translations of tapestries in the Crystal Tower are the most reliable origin story for the Maormer, and tell the tale of how the Maormer were likely separated in their original homeland of Aldmeris. According to this story, Orgnum was a massively rich Aldmer nobleman, who used his wealth to rebel against the governments and powers of Aldmeris. He and his followers were exilled from Aldmeris, to a place where they could not take such actions again, via impenetrable mist, Pyandonea, "The Veil of Mist." This proved successful, as they never assaulted Aldmeris again, and became the Maormer.[4]

The Maormer were relentless in their drive to conquer Summerset, and there is scarcely a year throughout the First or Second Era when they did not ravage the coastlines of the Altmer.[5] Every attack launched by the Maormer against Summerset has been led by Orgnum himself, and despite the number of wars and strategies employed by the Maormer, each of these attacks has proved to be an ultimate failure.[4]

In the year 2E 486, a small Maormeri fleet was sighted off the coast of Alinor, and King Hidellith ordered his navy to give chase. The navy followed the ships through uncharted waters, into an ambush in Pyandonea itself. Most of the Alinori navy was destroyed, but a single warship returned to Summerset, a testament to the maritime genius of the Altmer.[4]

During the Three Banners War in 2E 582, the Maormer had some form of control over the Elsweyr island Khenarthi's Roost, under a treaty they agreed to with the city of Mistral. Ulondil, the Maormer ambassador of the island, along with his followers, later went on to betray the agreement. The Sea Vipers, a powerful faction of Maormer, was known to have also led attacks against the First Aldmeri Dominion throughout many of its controlled territories.[6]

The Second Aldmeri Dominion made allies of the Maormer,[7] although the Dominion allowed the kings of Colovia to eliminate Maormer outposts that had been established along the western coast of the mainland.[5]

The last documented appearance of the Maormer was the War of the Isle in the year 3E 110.[4] The united alliance of the kings of Summerset, Antiochus Septim, and the Psijic Order, combining the Imperial fleet, the royal navies of Summerset, and the Psijic's magical powers, succeeded in destroying the Pyandonean invading armada.[8][9] It was said that the storm brewed by the Psijic of Artaeum so annihilated Orgnum's fleet that he was never again able to muster together enough of a force to dare another battle.[4] 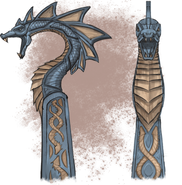 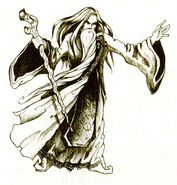 A Maormer from Pocket Guide to the Empire, Third Edition: Other Lands

Deutsch Español Suomi Français Italiano Nederlands Polski Русский Svenska Українська
*Disclosure: Some of the links above are affiliate links, meaning, at no additional cost to you, Fandom will earn a commission if you click through and make a purchase. Community content is available under CC-BY-SA unless otherwise noted.
Advertisement