For the character in Morrowind, see Mara (Character).

"Mara says: Live soberly and peacefully. Honor your parents, and preserve the peace and security of home and family."
―Ten Commands: Nine Divines

Mara is a goddess of the Nine Divines[1]. She is also known as Mother-Goddess and Goddess of Love in the Empire, and in Skyrim as handmaid of Kyne.[2][3] She makes an appearance in almost every culture's pantheon in Tamriel, and at times is affiliated with Nir who gave birth to creation. She may be married to, or act as a concubine of, either Akatosh or Lorkhan, depending on the religion.[2] In Morrowind, Mara appears in the form of Ama Nin.[4]

Ten Commands: Nine Divines has Mara instructing worshippers to: "Live soberly and peacefully. Honor your parents, and preserve the peace and security of home and family."[5]

Ark'ay The God describes a process by which Mara transforms Arkay, an ordinary shopkeeper, into a god, and his apotheosis.[6]

"Come to me, Mara, for without you, I might forget the ways of our fathers, and preening by the light of latest fashion, my words might tremble like the thin reeds of novelty in the tempest of enthusiasms."[7] 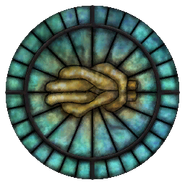 A statue dedicated to the goddess in Riften's Temple of Mara. 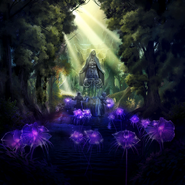 Grove of Mara in The Elder Scrolls: Legends.