Masser, also known as Jode[1] or Mara's Tear,[2] is the larger of the two moons of Nirn, and is red in color.

Among the Khajiit, Masser, as well as Secunda, are revered because their lunar phase helps determine the forms Khajiit take at birth.

Lorkhan, "The Missing God", was sundered into two halves during his destruction, becoming both Masser and Secunda.[3] The two moons symbolize his duality, reminding his man-creations of his struggle, which is most likely another reason for the Khajiit's worship. The Khajiit also refer to Masser as Jode.[1]

A passage from Lymdrenn Tenvanni's Journal suggests that Masser reaches its fullest state on the summer solstice.

Masser and Secunda (left) as seen in The Elder Scrolls: Arena. 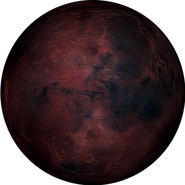 Masser as seen in Morrowind.

Masser and Secunda as seen in Skyrim.

Masser and Secunda as seen in Online. 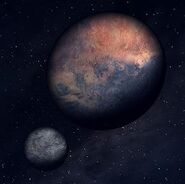 Masser and Secunda as seen in Oblivion

Čeština Deutsch Español Suomi Français Italiano 日本語 Polski Português Русский
*Disclosure: Some of the links above are affiliate links, meaning, at no additional cost to you, Fandom will earn a commission if you click through and make a purchase. Community content is available under CC-BY-SA unless otherwise noted.
Advertisement