"Excellent. The guardians are here. Time to bind this creature."
―Mavos Siloreth[src]

Mavos Siloreth is an ancient Chimer mage who played an important role during the Nede-Chimer War. He was part of the team of mages who initially bounded Balreth to Ash Mountain.

The War and Balreth[edit | edit source]

Mavos was a sorcerer during the Nede-Chimer War of the First Era and, according to him, the most powerful mage of his time.

During the decisive battle where General Balreth and his brother sacrificed themselves, creating the creatures known as Brothers of Strife, Mavos was fighting for Morrowind against the Nede invaders.

The Chimer won the Nedes on that battle, but at a great cost. Balreth started killing the Chimer forces, and after a great loss of lives, Mavos imprisoned Balreth with two summoned Flame Atronachs, Blaze and Ragebinder.

The Vestige requests Mavos' help to capture Balreth again. Mavos, as a ghost, guides one in obtaining the necessary ingredients, so the Vestige could have a vision of the past and see how Balreth was imprisoned.

Mavos appears one more time and speaks with the Vestige. After Balreth is defeated, Mavos encountered again during the battle against Sadal.

"So you're the guar who raised me. This had better be astonishingly important, or I'll do unspeakable things to your fleshy mortal form."

Balreth, the Brother of Strife, is ravaging Stonefalls. "The greatest mage of my era, and you wake me for something they could have read in a book? It's pathetic, but clearly, I must aid my people again. No deathworms for you just yet."

"I knew skeletons weren't enough. I should have summoned Daedra to protect this place. Or a fire atronach. That would have been good."

Can you teach me how to bind Balreth? "I don't remember how. Don't look at me that way, worm! I'm dead. Details fade over time. If you want to learn, I'll conjure a vision of the past. That should show you."

What do you need from me? "Ritual implements—a skull and a candle. Unless tomb robbers got them, look in the vaults to east and west. There's a puzzle lock on each one, and no, I don't remember the solution. Good luck with that."

I'll crack the puzzle and get the implements. "I can't perform the ritual without my implements. I don't even have hands to pick them up! That's annoying. East and west tombs, candle and skull. And whatever you do, don't ... um, do something. You know. That thing."

Couldn't you just tell me how you bound Balreth? "Yes, I could, if I remembered. There's not much use for remembering once you're dead. Don't pester me with questions, worm! I'm beginning to forget why I should care about the living."
Why are the candle and skull significant? "They're deeply personal ritual items. I slaved for two weeks making that kwama-grease candle. And the skull belonged to my favorite apprentice. Why? Because I said so."

After getting the ritual items:

"Ah. You have the skull and candle. You want me to be impressed? You can gather small objects. Good for you. Now stand back while I perform the ritual."

And if you're not successful? "You doubt my skill? If it's any consolation, what's left of you won't take much effort to clean up. Me, I'm a ghost already, so it hardly matters."

Very well. I'm ready. "Good for you. Prepare yourself."

In the Charred Ridge, inside the vision of the past:

"Excellent. The guardians are here. Time to bind this creature."

What do I do? "Touch the altar! Balreth's power flows into the guardians. He should be bound ... or he might explode. Anyway, be prepared for anything, apprentice!"

At Othrenis, after completing the ritual:

"So that's what happened! I remember many mages dying, and there was something about a shield spell. I grew weak holding him in place. Then there was a bright light. Everything fades after that."

Well met, Mavos. "Again I find myself talking to you. Very well. As you've already seen, completing a complex spell requires precision. Controlling the ebb and flow of Magicka is the heart of spellcraft."

What do I do this time? "The cave behind you holds the final Focus Stone. To reach it, you must understand the ebb ans flow of magic. You represent all living mortals here. Try not to embarrass yourself."

I have the final stone "So you do. Unlike the Grandmaster, you've proven you can act with planning, patience, and courage. Now with our aid, you can reforge Sadal's bindings."

What do I need to do? "We'll return to the Caldera. Place the foci around the caldera platform. The other mages and I will take it from there." 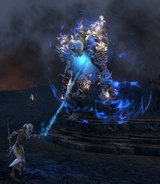 Mavos holding Balreth during the First Era, as seen in the vision 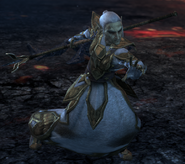 Mavos alive during the First Era

Retrieved from "https://elderscrolls.fandom.com/wiki/Mavos_Siloreth?oldid=3035848"
*Disclosure: Some of the links above are affiliate links, meaning, at no additional cost to you, Fandom will earn a commission if you click through and make a purchase. Community content is available under CC-BY-SA unless otherwise noted.