Main Quest
Meet Sul-Matuul is the sixth quest in the main questline of The Elder Scrolls III: Morrowind, after Zainsubani Informant.

After talking with the former Ashlanders in the previous quest, the Spymaster Caius Cosades gives the Nerevarine new orders: they must go to the Urshilaku Tribe and speak with their leaders about the Nerevarine Prophecies.

and advises them to take supplies from Fort Moonmoth. After the conversation, they can talk with Crulius Pontanian or Somutis Vunnis to take potions and other essentials, or they can skip this step and go to the Urshilakus directly.

After arriving in the camp, the Ashlanders do not trust the Nerevarine, and refuse to talk. If the Nerevarine inquires about Ashlanders customs, it is possible to raise the tribe's disposition towards the Hero by asking everyone about a "thoughtful gift", and acquiring that gift for them.

In the center of the large group of yurts, the Ashkhan Sul-Matuul's Yurt can be found, but he refuses to talk too, and will attack if the Hero stays in his hut for too long. He cannot be persuaded by any means.

The Nerevarine may enter Zabamund's Yurt and speak with the Zabamund. The Nerevarine will have two options during the conversation; 200 drakes as a gift, or give an honest answer to his inquiry. After convincing him that they are worthy, he will direct them to the Ashkhan Sul-Matuul, who is now willing to talk, but doubts the Hero's intentions. He explains that if they want the help of the Urshilaku, they have to become a Clanfriend, and gives a quest: Sul-Matuul wants the Hero to go in the Urshilaku Burial Caverns and retrieve the Bonebiter Bow of Sul-Senipul from his father's Wraith.

The Ancestors Burial Cave, which is located south of the camp, close to the Dunmeri Fort Falasmaryon and the Dwemer Ruins of Bthungthumz. A small door close to a dead tree is easily visible if the weather is clear. The entire cavern is roaming with undead creatures. It is a very large area with many sublocations. The bow can be found in Juno Burial, the deepest section of the caverns, accessible from Laterus Burial. The Wraith of Sul-Senipul is located within the last room in Juno Burial, and will defend the area. After defeating Sul-Senipul's wraith, the Nerevarine may take the Bonebiter Bow of Sul-Senipul from his remains and return to Sul-Matuul.

After returning to Ashkhan Sul-Matuul, who is pleased with the Nerevarine's success, the Hero receives the bow and is asked to use it honorably. Sul-Matuul will, then direct the Nerevarine to the tribe's wise woman, Nibani Maesa.

The Nerevarine goes to the Wise Woman's Yurt to speak with Nibani about the "Nerevarine Prophecies". She readily answers all questions and explains the conditions that the Hero must fulfill to be considered as the Nerevarine, "The birth under moon and star, the mark on the corpse and the uncertain parents". However, she says that they are not the Nerevarine, yet, but they are one of the people who may become. Then, she gives them two books containing information about the prophecies, and explains that more may be learned from books called The Lost Prophecy and Nerevarine Prophecy, and that the Dissident Priests may have these books.

They should now report back to Spymaster Cosades, who will issue new orders. 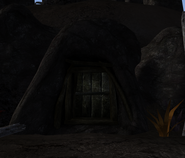 Wraith of Sul-Senipul
Add a photo to this gallery

Retrieved from "https://elderscrolls.fandom.com/wiki/Meet_Sul-Matuul?oldid=3145933"
*Disclosure: Some of the links above are affiliate links, meaning, at no additional cost to you, Fandom will earn a commission if you click through and make a purchase. Community content is available under CC-BY-SA unless otherwise noted.