Memory Wraith is a creature card in The Elder Scrolls: Legends that is a part of the Return to Clockwork City expansion.

This card is acquired during Act 3 of Return to Clockwork City.

This card is best used against a player that has Alduin in their hands, because it banishes the opponents discard pile. It is also a relatively strong card to use in any deck. 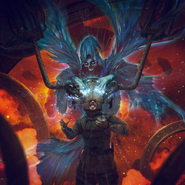 Retrieved from "https://elderscrolls.fandom.com/wiki/Memory_Wraith?oldid=2755953"
Community content is available under CC-BY-SA unless otherwise noted.