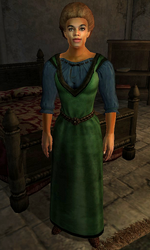 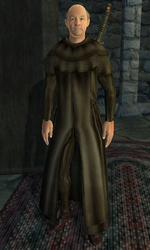 Examples of a typical female (left) and male (right) humans.

Men, as a racial term, encompasses beings of the human race in Tamrielic culture that are not Mer. Because they are able to have children together,[1] sometimes the races of men and mer are both considered to be members of the human species, but at other times only men are considered human.[2]

Men come in an array of skin tones and pigments depending upon their ancestry, with Nords and Bretons being the palest and Redguards being the darkest. There are four subraces of Men currently existing on the Tamrielic continent. These include, Imperials, Nords, Bretons, and Redguards. The Nedes are an extinct race of Men from which the Imperials sprang.

Several Men came from Akavir during the reign of Reman Cyrodiil. These Men formed The Blades. It is unknown whether Men still exist on the Akaviri continent.

The term "Men" originated from mannish language. It is used to mean "them" or "us" - group of people. The term is analogous to the word "Mer" in ancient Aldmeri tongue. Both of the racial groups have come to calling each other by the names and do not find it offensive in any way. They have been seen to be referring to their own kind by the term as well. This is probably due to the fact that both groups share certain distrust for each other and arrogance to consider themselves better. The words men and mer are often not capitalized when used together in the same context.

Members of this race who are of the masculine gender are referred to as "men", or a "man" when referring to an individual. As with mer, but more commonly as the words originate in Tamrielic, those of the feminine gender are known as "women" collectively or a "woman" individually; when grouped together as a race irrespective of gender they are all called "men". "Mankind" is also a word used in the context of referring to the entire race.

Unlike mer, there is no consensus about the continent or region of Nirn from which men could have originated. There are no known elven records on this subject, and men began writing relatively late, meaning that there are no early records written anywhere except those chronicled by mer.

However, when Atmorans began conquering Tamriel in Skyrim, they found Nedes and Bretons, the mannish races well assimilated in cultures dominated by elves.[2] During the conquest of Tamriel by the people from Atmora, they came across other humans already inhabiting the whole continent, and it was a continent of mer ruling over men.

The early Tamrielic tribes of men may have been even earlier immigrants from at least Atmora if not other continents, looking for a new, better life.[2]

Some Imperial scholars believe that, irrespective of a greater distance of relation in contrast to mer, men could have originally shared the elven homeland of Ehlnofey and have evolved from Aldmer themselves.[source?]

"Humans are all short-lived. Ephemeral, as we of the Elder Races say. They come and go as the seasons -- but the families of the powerful ones live on for a time. Their cities and dominions bloom like spring flowers, only to wither and die in the summer sun. But the Elves endure. We are as a year to their hour, a decade to their day."
―Drelliane to Queen Barenziah

The most significant difference among men and mer is their lifespan. Unlike the centuries-old elves, Men usually live no more than one hundred years. The oldest (naturally) to be recorded was the Imperial Sirollus Saccus, who was over 274 years old during the events of Morrowind. The oldest known living man however is Miraak, who lived during the Merethic Era, putting his lifespan well over 4500 years. His prolonged life can be attributed to Hermaeus Mora and/or him spending the majority of his life in Apocrypha.

Men and mer also have various physical differences, as men are more muscular than most elves and have fewer shades of skin color. Another easily noticeable feature of elven kind is their pointy ears, which Men do not have. Most elves, even the women, stand at twelve inches or more over most men. Some exceptions to this rule are the Orsimer, whom are very different from other elven races. They resemble other beast-like races such as Goblins and the Bosmer (Wood Elves), who are shorter than most humans.

Both men and mer vary in terms of magical potency and attitude to magic. Among men, Bretons have particular reputation as mages, while modern Nords usually dislike magic.

The Nords are a tall and fair-haired people from Skyrim who are known for their incredible resistance to cold and even magical frost. They are enthusiastic warriors, and act as soldiers and mercenaries all over Tamriel. Eager to augment their martial skills beyond the traditional methods of Skyrim, they excel in all manner of warfare. They are direct descendants of Atmorans, who migrated to Tamriel in the time period known as the Return. They lead and crew the merchant fleets of many regions, and may be found all along Tamriel's coasts.

Natives of the civilized, cosmopolitan province of Cyrodiil, the Imperials are well-educated and well-spoken. Imperials are also known for the discipline and training of their citizen armies. With this they were able to fight off the Redguard and control most of Tamriel. Imperials have proven to be shrewd diplomats and traders, and these traits, along with their remarkable skill and training as light infantry, have enabled them to subdue all the other nations and races, and to have erected the monument to peace and prosperity that comprises the glorious Empire. The Imperials control most ports in Tamriel.

Redguards hail from the province of Hammerfell. They are a race that is known to be extremely quick and agile. They are excellent in all arts concerning blade and shield. They are descended from a long line of warriors and mystic seers.

The most naturally talented warriors in Tamriel, the dark-skinned, wiry haired Redguards of Hammerfell seem born to battle, though their pride and fierce independence of spirit makes them more suitable as scouts or skirmishers, or as free ranging heroes and adventurers, than as rank and file soldiers. In addition to their cultural affinities for many weapon and armor styles, Redguards are also blessed with hardy constitutions and quickness of foot.

Redguards view use of magic unfavorably, particularly Conjuration and Illusion, because of the ability to Soul Trap and tamper with the minds of others. Generally, they consider wizards weak or cowardly. However, it is known that Redguards were fond of Destruction spells - suiting their warlike culture well.

Although Redguards are Men, they do not share the same blood as Nords, Bretons, and Imperials because of their origin in Yokuda.

Bretons are Men with elven ancestry who hail from the province of High Rock. Specifically, the Bretons have descended from the mannish people known as the Nedes and the ancient merish people known as the Aldmer. The Aldmer thought of making a superior race with their own "Elder," or "Superior," blood by mating with other races. The Bretons are sometimes called "Manmeri" because of this.

They are pure spell weavers and are advanced in all the arcane arts. While lacking in physical skill, they make up for it in their ability to resist and cast spells that overwhelm most people. They are united in culture and language, but are divided politically. Their origins can be traced to the First Era of Tamriel's history, when the Aldmer intermingled extensively with the Nedic people. This mostly happened during the period in the first Era when Mer held Men as slaves, which lead to masters impregnating their female captives. Bretons are of average height, and have either light or dark hair.. They are highly intelligent, willful, and have an outgoing personality. It is said that Bretons are weaned on magic, for it seems to infuse their very being. Intermingling with Elven blood has given Bretons an affinity for magic, though hardiness is also part of their heritage. Breton culture operates under the feudal system, and their society is agrarian and hierarchical.

Atmorans were humans native to the frozen continent of Atmora far north of Tamriel. It is known that they resembled modern Nords, however, some of them had different features than others, depending on which region of Atmora they lived in.

Early Atmorans had not developed a system of writing, and as a result, little is known about their history. Earliest records of Atmorans date to the mid-Merethic Era when they first migrated to Tamriel. The reason early Atmorans migrated from their homeland was to escape the ongoing civil war there. Over time, more and more Atmorans migrated to Northern Tamriel, in the region now known as Skyrim.

The Snow Elves in the area were concerned about the rapid population increase of humans and organized a slaughter in the event which had came to be known as the Night of Tears. In retaliation, Ysgramor gathered an army of Five Hundred Companions and mounted an assault against the Snow Elves. This event is known as The Return. After the Return, Atmorans stopped coming into Skyrim from their homeland.

Those who stayed are believed to have died as Atmora froze and changed beyond recognition. The Atmorans that left became modern Nords, and those who went south assimilated with the Nede and became Imperials.

The Nedes were a race of men that were the ancient ancestors of the modern Imperials. They lived throughout Hammerfell, Skyrim, Morrowind and Cyrodiil.

The Nedes in Cyrodiil were slaves of the Ayleids until in 1E 243 when St. Alessia created an uprising and freed them, creating the first Empire.

The Nedes were known to have had a race with the Chimer and had eventually been confined to Hammerfell as they had died out everywhere else. Upon the arrival of the Redguards (Ra Gada) they had been slaughtered and their race extinct. All the Nedic descendants are mainly Imperial.

The Keptu were one of the many breeds of men back in the First and Merethic Era. Very little is known about them.

The Akaviri were a race of men native to the mysterious continent of Akavir. Despite their involvement in many historical events, very little is known about them. They are believed to have had a distinct Oriental culture.

The last records of Akaviri/Tsaesci date back to the early First Era when they had tried to invade Tamriel, but were stopped by the army of Reman Cyrodiil.

A few books in the game spoke of the Kothringi, a race of men hailing from Black Marsh. They were said to look like men only with metallic skin and had been quite common in the region during the Second Era. They were eventually wiped out by the Knahaten Flu before the start of the Third Era.

The Orma are a tribe dating from the First Era. They are native to Black Marsh. There exists an elevated occurrence of congenital blindness in the tribe, more specifically as a result of tribe members completely lacking eyes. Such individuals are said to be masters of their other senses. This makes them appear to be something close to elven Falmer. Which lead to speculation that the Orma's condition could have been the result of local Dwemer experiments.

They are believed to be extinct due to the outbreak of the Knahaten Flu during the Second Era, which benefited the Argonians, who had, at some point, developed an immunity to the disease.

Čeština Español Suomi Italiano Nederlands Português Русский
*Disclosure: Some of the links above are affiliate links, meaning, at no additional cost to you, Fandom will earn a commission if you click through and make a purchase. Community content is available under CC-BY-SA unless otherwise noted.
Advertisement