For the quest of the same name, see Mephala (Quest).

) is one of the Daedric Princes. She is known by the names Webspinner, Spinner, and Spider,[1][2] and her sphere is sometimes claimed to be lies,[3] sex, murder, and secrets,[4] but others claim her true sphere is obscure to mortals.[1] She is worshiped by the Dunmer as one of the Three Good Daedra in their pantheon.[5][6][7] She enjoys seducing and interfering in mortal affairs, presumably for her own amusement,[1][8] though others suspect her manipulations are for a greater purpose.[9] Mephala is the ruler of the Spiral Skein[10] and more obfuscated domains in Oblivion tied together by magical ghostweb.[UL 1] Mephala's minions are known as Spider Daedra.[11]

The Morag Tong, an assassins' guild in Morrowind, worship Mephala as their divine patron and founder.[3][6] Some scholars have identified the Night Mother of the Dark Brotherhood, a rival cult of assassins, as a manifestation of Mephala,[12] while other scholars dispute this assertion,[13] or believe the connection is indirect.[14]

The summoning date of Mephala is the 13th of Frostfall.[source?] In The Elder Scrolls IV: Oblivion, Mephala can also be summoned if the summoner offers Nightshade at her shrine between midnight and dawn.[15]

Like all Daedric Princes, Mephala possesses no fixed gender.[2] Unlike other princes however, she is called the "Androgyne" and as such is often perceived as having both male and female characteristics.[6] In the Elder Scrolls games Mephala's sex is not obvious during game-play, though superficially speaking Mephala seems more womanlike in contrast to Vivec, a being associated with Mephala but who seems more manlike;[4] however, Vivec is seen by Dunmeri religion as ambiguous but defined in contrast to Mephala who is said to be "manifold and androgynous."[5]

Back in the Merethic Era, Boethiah "illuminated" the Prophet Veloth and his Chimer followers to renounce all ties to the Aldmer and found a new nation based on Daedric principles, which came to be known as Morrowind. Azura taught the Chimer the mysteries needed to be different than the Altmer. Mephala taught the Chimer the skills they would need to evade their enemies or to kill them with secret murder.[16] Enemies were numerous in those days since the Chimer were a small faction. Mephala, along with Boethiah, organized the clan systems that eventually became the basis for the Great Houses of the Dunmer.[17][6] Mephala created an assassins guild, the Morag Tong.[2]

In The Elder Scrolls III: Morrowind, it is revealed that there is a record of Mephala dealing with the Daedric Prince Sanguine. Mephala made a deal with Sanguine for twenty-seven tokens she could give to her devoted followers. The Dark Brotherhood stole these tokens from the Morag Tong. According to a Morag Tong member, Mephala eventually arranged for them to return to the guild.

Another interaction with the Prince in Morrowind happens during her quest, in which the Nerevarine learns of and kills a rogue Morag Tong assassin called Balyn Omavel, after which Mephala grants the Nerevarine the Ring of Khajiit.

The Hero of Kvatch is also reported dealing with Mephala during the events of The Elder Scrolls IV: Oblivion. She asked the Hero to go to the settlement of Bleaker's Way, which consisted of two families. She then ordered the Hero to kill the leaders of the two families, and leave evidence that the murders were done by the other family. Eventually this brought chaos to the peaceful settlement, and the members of the two families killed each other. Mephala was pleased seeing this and rewarded the Hero with the Ebony Blade.

Mephala appears in The Elder Scrolls V: Skyrim during the quest "The Whispering Door." Upon completion, she rewards the Dragonborn with the Ebony Blade. She then speaks to them during the first, second, fourth, sixth, eighth, and tenth kill with the Blade that counts towards restoring it.

Elder Othreloth in Raven Rock says that Mephala is one of the Reclamations, the "true" Tribunal, alongside Azura and Boethiah.

According to Darkest Darkness, Spider Daedra are the servants of Mephala, taking the form of spider-humanoid centaurs, with a naked upper head, torso, and arms of human form, mounted on the eight legs and armored carapace of a giant spider. Unfortunately, these Daedra are so fierce and irrational that they cannot be trusted to heed the commands of the Spinner. As a consequence, few sorcerers are willing to either summon or bind such creatures in Morrowind. However, before the Oblivion Crisis, some conjurers had found a way to bind and summon this chaotic Daedra. These Daedra are also found in Mehrunes Dagon's Deadlands in The Elder Scrolls IV: Oblivion.

Artisa Arelas, a Savant in Morrowind, explains: "The Morag Tong is an assassins guild sanctioned by the Empire to provide three varieties of execution: public executions, private executions, and House Wars executions. Constrained by ancient traditions and rigid codes of conduct, the Morag Tong only recruits candidates of proven skill and honor. Morag Tong only accepts legally approved contracts called 'writs,' but rumor hints at the execution of secret extralegal 'grey writs.' The Morag Tong is the sworn enemy of the Dark Brotherhood."

Although it is said that the Dark Brotherhood values gold rather than religion, they religiously worship one primordial state of chaos, Sithis.[8] Sithis speaks only to the Night Mother, then the Night Mother brings the information (usually the murderous contract) to the Listener, and then to one of the Speakers, who then order the murderer, the lowest member of the Dark Brotherhood, to perform the killing.

There are many controversies about the entity called the Night Mother. Carlovac Townway in his famous historical series 2920, The Last Year of the First Era, portrays the Night Mother as an attractive dark woman who leads the Morag Tong. This is disputed by Ynir Gorming in his book, Fire and Darkness: The Brotherhoods of Death. Gorming speculates that Night Mother is Mephala herself. There is another account by Enric Milnes titled Sacred Witness: A True History of the Night Mother, which says that Night Mother is just an elder female mortal. This amount of contradictions leads to the conclusion that no one really knows who or what Mephala is, a fact that alludes to her sphere, being the Daedric Prince of lies and secrecy.

Aside from the Black Hand, Mephala is worshiped mostly by Morag Tong, while other worship to the Good Daedra ceased to exist in the Dunmer society.[source?]

By the Fourth Era, following the eruption of the Red Mountain, a new religious movement of the Dunmer people arose, dubbed the Reclamations. This new doctrine declared the downfall of the Tribunal and the rise of their previously named Anticipations as the objects for worship. These Reclamations included Azura, Mephala, and Boethiah, who were "reclaiming their status from the Tribunal." [7]

The legend of the blade describes it as follows: "The Ebony Blade, sometimes called the Vampire or the Leech, resembles an ebony katana, and its power is very dark indeed. Every time the Ebony Blade strikes an opponent, part of the damage inflicted flows into the wielder as raw power. The Blade itself may not be any more evil than those who have used it, but at some point in its history, a charm was cast on it so it would not remain with only one bladesman for too long. The wizard who cast this charm sought to save the souls of any too infatuated by the Blade, and perhaps he was right to do so."

Another artifact of Mephala was the Ring of Khajiit, though it was also associated with Meridia. It was a sought after piece of equipment, especially by thieves for the sneaking bonuses it granted.[18]

Mephala during the events of The Elder Scrolls Online 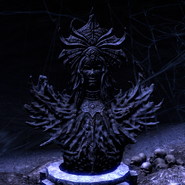 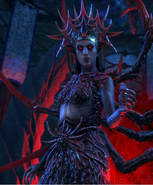 Mephala during the events of The Elder Scrolls Online: Summerset
Add a photo to this gallery


Cite error: <ref> tags exist for a group named "UL", but no corresponding <references group="UL"/> tag was found.
Retrieved from "https://elderscrolls.fandom.com/wiki/Mephala?oldid=3087390"
*Disclosure: Some of the links above are affiliate links, meaning, at no additional cost to you, Fandom will earn a commission if you click through and make a purchase. Community content is available under CC-BY-SA unless otherwise noted.