Meridia's Beacon is a quest item in The Elder Scrolls V: Skyrim.

"A new hand touches the beacon. Listen. Hear me and obey. A foul darkness has seeped into my temple. A darkness that you will destroy. Return my beacon to Mount Kilkreath. And I will make you the instrument of my cleansing light."
―Meridia[src]

When Meridia's Beacon is picked up, the quest "The Break of Dawn" will begin. Meridia will demand that the Dragonborn take the beacon back to her statue in order to cleanse her temple of a mentioned "Darkness."

The Beacon can be found in almost any boss chest after level 12. However, if the Dragonborn interacts with the Statue to Meridia before finding the Beacon, the item's location will be given and a marker put on the World Map. 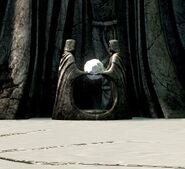 Meridia's Beacon in its proper place at the Statue to Meridia