Common
Prophecy, Guard
Last Gasp: Reduce the cost of a random Dragon in your hand by 1.

Midnight Snack is a creature card in The Elder Scrolls: Legends that is a part of the Heroes of Skyrim expansion.

Midnight Snack makes an excellent addition to Dragon decks. The Prophecy and Guard keywords are useful for stalling for later turns since most Dragons require more magicka to play. The Last Gasp ability allows the player to bring out heavy-hitters faster, but is not necessary to the card's role; if a Guard is needed or this is drawn from rune loss, playing it with no Dragons in hand is better than waiting to draw a Dragon. 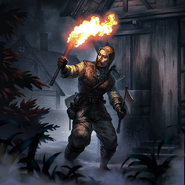 Retrieved from "https://elderscrolls.fandom.com/wiki/Midnight_Snack?oldid=3004987"
*Disclosure: Some of the links above are affiliate links, meaning, at no additional cost to you, Fandom will earn a commission if you click through and make a purchase. Community content is available under CC-BY-SA unless otherwise noted.