Breakthrough: excess damage is dealt to an opponent.
Summon: Bonus effect when played.
Summon: +3/+0 and Breakthrough if the top card of your deck is

Mighty Ally is a creature card in The Elder Scrolls: Legends.

Might Ally benefits from being used in a mainly Strength deck. His attributes are increased exponentially as he obtains 3 more Power, making him a strong offensive card, but only if the top card of one's deck is a Strength card. Modifying a deck to mainly house Strength cards will increase Mighty Ally's usefulness. 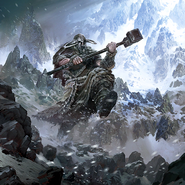 Retrieved from "https://elderscrolls.fandom.com/wiki/Mighty_Ally?oldid=3004876"
*Disclosure: Some of the links above are affiliate links, meaning, at no additional cost to you, Fandom will earn a commission if you click through and make a purchase. Community content is available under CC-BY-SA unless otherwise noted.