000AB6FF
Mikrul Gauldurson is a Draugr located within the crypt of Folgunthur. He has one of the amulet fragments on him for the "Forbidden Legend" quest.

Mikrul was the youngest son of Arch-Mage Gauldur. Along with his two brothers, Jyrik and Sigdis, he coveted the power of his father's amulet. After recovering the artifact, it was split into three pieces.

In their lust for power, the brothers each took one for their own, and used them to summon armies to destroy the cities of Skyrim. Arch-Mage Geirmund of Windhelm led a battalion of battlemages to end the murder spree, and seal the brothers in their respective tombs with a Writ of Sealing in each tomb.[1]

Condemned for your crimes against realm and lord.

May your name and your deeds be forgotten forever.

And the charm which you bear, be sealed by our ward."

When encountered, he summons Draugr Thralls to distract the Dragonborn during battle. When killed, his corpse contains the Gauldur Blackblade which is an enchanted Ancient Nord Sword that absorbs 5–25 points of health based on level, as well as other random loot. He also has a writ of sealing on him, which says that he is a murderer and betrayer.

After recovering all three amulet fragments, the Dragonborn must head to Reachwater Rock to reforge the Gauldur Amulet. There, the three Gauldurson brothers are fought a final time. Mikrul is the first to be fought and he summons between one and three thralls to battle alongside him. He prefers to do melee battle. 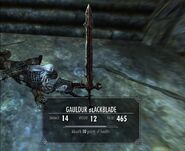 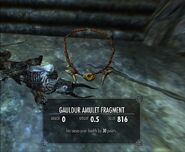 A Gauldur Amulet Fragment
Add a photo to this gallery

Retrieved from "https://elderscrolls.fandom.com/wiki/Mikrul_Gauldurson?oldid=3077007"
*Disclosure: Some of the links above are affiliate links, meaning, at no additional cost to you, Fandom will earn a commission if you click through and make a purchase. Community content is available under CC-BY-SA unless otherwise noted.