The Mines of Khuras or Khuras is an abandoned mineshaft located along the coast of the Glenumbra region in High Rock. Khuras was one of the more expensive mines created by the Bretons, becoming source for crystals and other types of gems. It has been abandoned, with various groups taking refuge.

The Mines of Khuras is situated along the coast, towards the Iliac Bay. It is next to the township of Aldcroft and the historical battleground known as the Glenumbra Moors, Khuras itself is rather hidden, it is located behind a hill near Aldcroft. The Mines was established as a way to excavate crystals and gems, the type of minerals that are crafted into jewelry that the nobles wear throughout Glenumbra. The caverns are vast and intensely dugout; natural stone bridges tower over the floor. Deep into the Mines of Khuras has a pool of water, likely seeping from the Hag Fen marshes located atop of the Mine. The jewels of Khuras are said to have magical properties, which makes the Mine very sought out by the Wizards and Warlocks of High Rock.

During the Imperial Simulacrum from 3E 389 to 3E 399, Emperor Uriel Septim VII was imprisoned along with Talin Warhaft in the Deadlands by Jagar Tharn. Tharn planned for months to capture the throne, and he was able to achieve so in the span of ten years. Tharn had a powerful weapon called the Staff of Chaos, and he split it into nine pieces and scattered them across Tamriel, the staff was the only thing keeping Uriel Septim and Warhaft in Oblivion. A warrior escaped his clutches and traveled all corners of Tamriel to retrieve the missing pieces. The hero was known as the Eternal Champion, and he assembled the staff and defeated Jagar Tharn at the Imperial Palace. The Eternal Champion had at one point visited the ruins of the Mines of Khuras in their quest to recover the pieces.[4]

After retrieving the fifth piece of the Staff of Chaos from the Crystal Tower in the Summerset Isles, the Eternal Champion had traveled to the province of High Rock to claim the next piece, their travels had brought them to the city-state of Camlorn. A member of the Brotherhood of Seth had stolen a map fragment to the Crypt of Hearts from their temple, believing that Jagar Tharn was impersonating the Emperor. Halfas Varn of the Brotherhood had tasked the Eternal Champion with taking down Brother Barnabas at the Mines of Khuras and retrieving the map fragment, in exchange for the piece's next location. In the end, Barnabas was defeated by the Champion, and the map fragment was retrieved. The Champion would then leave for the Crypt of Hearts.[5] 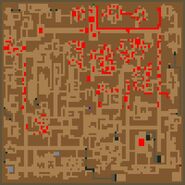 First Level of the Mine. 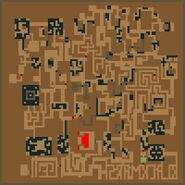 Second Level of the Mine.
Add a photo to this gallery

Retrieved from "https://elderscrolls.fandom.com/wiki/Mines_of_Khuras?oldid=2986353"
*Disclosure: Some of the links above are affiliate links, meaning, at no additional cost to you, Fandom will earn a commission if you click through and make a purchase. Community content is available under CC-BY-SA unless otherwise noted.