Yes, before At the Summit of Apocrypha

For other uses, see Miraak (Mask) and Miraak, Dragonborn (Legends).

Mir-Aak, "Allegiance-Guide") is the primary antagonist of The Elder Scrolls V: Dragonborn, the first of all known Dragonborns (according to himself, the locals of Solstheim, and Hermaeus Mora) and a dragon priest.

During the period of time when dragons ruled over mortals, Miraak served as a dragon priest on the island of Solstheim. He came into possession of a Black Book which in turn led him to servitude under Hermaeus Mora, the Daedric Prince of Knowledge and Fate, who taught him a means to great power: a dragon shout capable of bending dragons to his will.

With this forbidden knowledge in his possession, Miraak turned on his dragon masters, using it, and his power as Dragonborn, to devour their souls to become ever more powerful. During the Dragon War, the ancient Nord heroes Hakon One-Eye, Gormlaith Golden-Hilt, and Felldir the Old had pleaded for Miraak to use his power as Dragonborn to assist them in defeating Alduin. However, Miraak refused to do so and instead attempted his own rebellion against the dragons. Because of his betrayal, the dragons razed his temple on Solstheim.

His rebellion was unsuccessful and he was defeated by another Dragon Priest named Vahlok who was then made his jailor, restraining him to Solstheim.[1] Other accounts mention that just as Vahlok was about to kill Miraak, Hermaeus Mora saved him by transporting him to the realm of Apocrypha. The dragons then appointed Vahlok as ruler of the island, but not before he was compelled to swear an oath of vigilance to watch for Miraak's return, earning him the title "The Jailor."[2]

Meanwhile, Miraak stayed in the realm of Apocrypha until he could amass enough power and influence to return to Solstheim, which he was able to do in 4E 201.

Miraak can be seen as a very arrogant and rash individual, believing that his Dragonborn heritage sets him above his former dragon masters. Upon meeting the Last Dragonborn, he can claim that, compared to him, they have only killed a "few dragons" and do not yet know the true power of a Dragonborn such as himself (unless the main questline has been completed, in which case Miraak will grudgingly state admiration for the Dragonborn). He also believes himself above the servitude of Hermaeus Mora. Miraak is also a being that desires power, willing in the past to bind himself in servitude to Hermaeus Mora in order to gain forbidden knowledge and power.

Despite, or perhaps due to, his arrogance, Miraak is shown to be a very powerful individual, as he was not only able to defy the Dragons he served, but he was also able to devour many of them before his defeat as a total of twenty-one different Dragon skeletons can be found both around and within his temple.

Miraak proves to be fiercely independent and seems to be motivated solely by his lust for power. This can be seen not only through his initial betrayal of the Dragons at the height of their power, but also through his resistance to the effects of Apocrypha as it is said that all those who venture there become prisoners of their own thirst for knowledge and are unable to leave, whereas Miraak appeared unaffected.

During his final battle with the Dragonborn, he claims that Hakon and the other ancient Nord heroes wished to use him to slay Alduin, but he chose not to for his own reasons. However, should Alduin have already been defeated upon meeting him, he will claim that he could have killed the World-Eater himself, a further sign of his arrogant nature.

Shortly after the quest "The Way of the Voice," two Cultists will call out and ask the Dragonborn if they are truly Dragonborn. After the conversation they will attack. After they are killed, a note with orders to kill the "False" Dragonborn in order to please Miraak will be found on one of their bodies. The quest will then be directed to the island of Solstheim.

Once on the island, asking around Raven Rock will cause someone to suggest the Temple of Miraak be investigated. There it will be learned that Miraak has begun taking over the people of Solstheim using the All-Maker Stones.

Miraak himself is met for the first time at the end of this quest. Upon finding the Black Book: Waking Dreams in the depths of the temple, the Dragonborn will be transported to Apocrypha, the realm of Hermaeus Mora. Immediately, Miraak will strike the Dragonborn to their knees and claim that they do not know the true power of a Dragonborn. He then says that they can await his return like the rest of Tamriel before ordering his seekers to transport the Dragonborn back to Nirn and riding off on a dragon.

After this, should the Dragonborn kill a dragon when he already possessed a dragon soul, either on Solstheim or in Skyrim, Miraak will briefly appear, taunt the Dragonborn, absorb the dragon's soul himself, and then disappear.

Miraak appears one last time at the end of this quest to kill the Dragonborn and devour their soul so that he may return to Solstheim. Miraak begins with a short monologue as his dragon minions, Relonikiv and Kruziikrel, sit perched upon the nearby arches.

Upon his defeat, Hermaeus Mora appears, impaling him with a tentacle, and expresses his disappointment. Then Miraak disintegrates, leaving just a skeleton. Hermaeus Mora then transfers his status to the Last Dragonborn. The Dragonborn then absorbs Miraak's soul, which yields between five and ten dragon souls, plus any that Miraak may have stolen. Due to the soul absorption, he will only remain as a dead skeleton and thus the Dragonborn is never able to see Miraak's face without unequipping the mask via console commands.

This mantra is repeated by people found working on Miraak's shrines surrounding the All-Maker Stones. They will each say one line when spoken to. In addition, if an All-Maker stone is activated, Miraak's disembodied voice will repeat a slightly altered variant of the mantra.

Miraak's shouts seem to lack time limits. However, their usage rate is not as frequent as that of Greybeards.

During his battle with the Last Dragonborn, whenever his health reaches a critical level, Miraak will use the Shouts Become Ethereal and Whirlwind Sprint to become immune to damage and flee back to the center of the arena. There, he will call down one of the dragons under his control and use a unique four-word shout to instantly kill it, absorbing their soul and restoring his health. The shout, "..., ziil los dii du!" roughly translates into "..., your soul is mine to devour!" He will also sometimes begin the battle by using the Dragon Aspect shout, greatly enhancing his abilities, and will frequently use Fire Breath, Frost Breath, and Cyclone to attack the Dragonborn in addition to his weapons and magical abilities.

Miraak also has a few unique abilities that the Dragonborn does not have access to. He is able to use Bend Will to control several dragons at once and is able to command them from afar. Whenever the Last Dragonborn slays a dragon after meeting Miraak, there is a chance he will appear and absorb the dragon's soul for his own. This usually happens when the Last Dragonborn possesses one or more dragon souls, indicating his power to absorb dragon souls is slightly stronger. This also shows that Miraak, even when not at full power, possessed the ability to temporarily travel between Tamriel and Apocrypha, though in a somewhat incorporeal state. In this state he is also immune to all sources of damage.

Miraak has the following:

The following are items equipped by Miraak. They can be looted from his skeletal corpse following the battle. 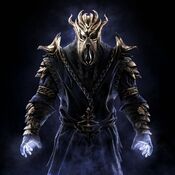 Promotional image of the First Dragonborn

Notice: The following are unlicensed references. They are not copyrighted by a ZeniMax Media company, but can still be considered part of The Elder Scrolls lore and are included for completeness.
Čeština Deutsch Español Français Italiano 日本語 Polski Русский Українська
*Disclosure: Some of the links above are affiliate links, meaning, at no additional cost to you, Fandom will earn a commission if you click through and make a purchase. Community content is available under CC-BY-SA unless otherwise noted.
Advertisement