Miraak is a very arrogant and rash individual, believing that his Dragonborn heritage sets him above his former dragon masters. Upon meeting the Last Dragonborn, he can claim that, (unless the main questline has been completed, in which case Miraak will grudgingly state admiration for the Dragonborn) compared to him, they have only killed a "few dragons" and do not yet know the true power of a Dragonborn, such as himself. He also believes himself above the servitude of Hermaeus Mora. Miraak is also a being that desires power, willing, in the past, to bind himself in servitude to Mora in order to gain forbidden knowledge and power.

Despite, or perhaps due to, his arrogance, Miraak is shown to be a very powerful individual as he was not only able to defy the Dragons he served but he was also able to devour many of them before his defeat as a total of twenty one different Dragon skeletons can be found both around and within his temple.

Miraak proves to be fiercely independent and seems to be motivated solely by his lust for power. This can be seen not only through his initial betrayal of the Dragons at the height of their power but also through his resistance to the effects of Apocrypha as it is said that all those who venture there become prisoners of their own thirst for knowledge and are unable to leave whereas Miraak appeared unaffected.

During his final battle with the Dragonborn, he claims that Hakon and the other ancient Nord heroes wished to use him to slay Alduin, but he chose not to for his own reasons. However, should Alduin have already been defeated upon meeting him, he will claim that he could have killed the World-Eater himself, a further sign of his arrogant nature. 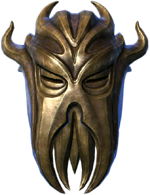 Miraak also has a few unique abilities that the Dragonborn does not have access to. He is able to use Bend Will to control several dragons at once and is able to command them from afar. Whenever the Last Dragonborn slays a dragon after meeting Miraak, there is a chance he will appear and absorb the dragon's soul for his own, indicating his power to absorb dragon souls is slightly stronger. This also shows that Miraak, even when not at full power, possessed the ability to temporarily travel between Tamriel and Apocrypha, though in a somewhat incorporeal state. In this state he is also immune to all sources of damage.

Notice: The following are unlicensed references. They are not copyrighted by a ZeniMax Media company, but can still be considered part of The Elder Scrolls lore and are included for completeness.
Retrieved from "https://elderscrolls.fandom.com/wiki/Miraak?oldid=1459132"
*Disclosure: Some of the links above are affiliate links, meaning, at no additional cost to you, Fandom will earn a commission if you click through and make a purchase. Community content is available under CC-BY-SA unless otherwise noted.