Mistveil Keep is the seat of power in Riften in The Elder Scrolls V: Skyrim. This stone keep is where Jarl Laila Law-Giver lives and rules, and where the city's jail and barracks are located.

The barracks are to the left and the jail to the right of the main door into the Keep, with the banners on each side. This is where most of the city's guards reside. The barracks can also be entered from inside the keep, go to the hallway behind the throne, turn left and enter the room directly ahead. The door to the barracks is opposite the entrance.

The Jarl and her entourage are seated here.

The Court Wizard can usually be found here, in this two-room chamber off the Banquet Hall, which houses her shop and bed along with an Alchemy Lab and Arcane Enchanter.

Gonnar Oath-Giver is plotting from this location (which was once a pantry) at the start of the Civil War. Open one door to head into the barracks, and open the other into a bedroom armory filled with weapons.

Located at the far end of the ground-floor corridor, this room has a number of precious gems and necklaces and a letter regarding the imprisonment of Sibbi Black-Briar.

There are three doors at the top of the stairs, each leading to a bedroom and a door from the Jarl's bedroom to a covered balcony overlooking Riften.

The following arrive if the Imperials take over Riften: 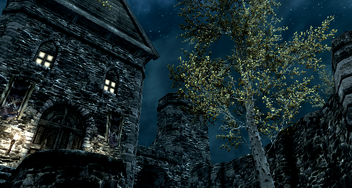 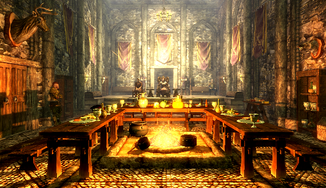 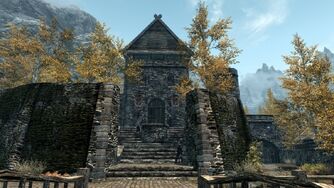 Mistveil Keep at day.
Add a photo to this gallery

Retrieved from "https://elderscrolls.fandom.com/wiki/Mistveil_Keep?oldid=2703154"
*Disclosure: Some of the links above are affiliate links, meaning, at no additional cost to you, Fandom will earn a commission if you click through and make a purchase. Community content is available under CC-BY-SA unless otherwise noted.