"Located inland in the southeast of Vvardenfell, Molag Amur is an uninhabited wasteland of rocky hills, steep-sided ravines, lava pools, and barren ash pavements. Pathfinding and travel is extremely difficult in this trackless wilderness, and is complicated by frequent ash storms."
―Anonymous[src]

Molag Amur is one of the nine regions that make up the island of Vvardenfell. Molag Amur consists of the southern portion of the Vvardenfell Ashlands and is the home of the Buoyant Armigers, the personal militia dedicated to Vivec.

Molag Amur, as mentioned before, is the southern portion of the Vvardenfell Ashlands. Molag Amur is a treacherous region to cross as the volcanic ashlands can be damaging to a commoner. Regardless, the many pilgrims travel along the main road located along the rim of the region. The town of Molag Mar serves as a resting stop for pilgrims partaking in the Pilgrimage of the Seven Graces. A test to show dedication to Vivec of the Tribunal. Large lava rivers referred to as Foyadas are found throughout Molag Amur such as Foyada Nadanat and Foyada Zabirbael, the two largest foyadas in Molag Amur. The local Ashlanders thrive in the region, and the most growing tribe in Molag Amur is the Erabenimsun Tribe, their camp is located in a canyon north of Mount Assarnibibi. According to legends, there is a race of super monster that lives in Molag Amur. They are the result of Vivec's seduction on Molag Bal.[1]

During the Interregnum in 2E 583, the town of Molag Mar was recently built, at least during the construction of Vivec City which had been going on for quite some time. The settlement was given to the Buoyant Armigers, the personal guard of Vivec, as their headquarters in Vvardenfell. Many pilgrims traveled to Molag Mar on their way to shrines in Molag Amur; the town was built to benefit them as well. Pilgrims coming to Molag Mar were disappearing on the road, resulting in the Buoyant Armigers to investigate the situation. Captain Naros tasked an Outlander called the Vestige to investigate the nearby Ashlander tribe in Almurbalarammi and to see if there is a link to the disappearances. Ibaal of the Ashlanders think that the Ruddy Man is responsible and is located in the Dreudurai Glass Mine in Mount Kand. After traversing the mine, it was revealed that the Dreugh in Dreudurai was responsible but the Ruddy Man himself was not involved. Pilgrims continued to come in Molag Mar and peace returned in the region.[2]

Around the same time, a group of explorers led by an Altmer Mage named Neramo funded an expedition into Nchuleftingth, to uncover the Heart of Lorkhan from the inner sanctum. Neramo's rival, an Altmer Battlemage named Artisan Lenarmen sought the Bthark Prism along with his private militia known as the Bronzefists. Neramo and his assistant, Vimy Lacroix, sought the aid of the Vestige to defeat Lenarmen and to recover the Heart of Lorkhan from the center of Nchuleftingth. In the end, the Vestige defeated Lenarmen and the Bronzefists. The Heart of Lorkhan was not located in Nchuleftingth but instead, the Bthark Prism was recovered instead.[3]

By 3E 427, the Dunmer of House Telvanni began to move from the nearby Azura's Coast and created the settlement called Tel Uvirith. The Berne Clan of Vampires settled in the nearby ruins of Galom Daeus and had risen as one of the three great Vampire clans in Vvardenfell. The Blight was released onto Vvardenfell in the same year, and this disease has affected various settlements including the few on the Bitter Coast. While fulfilling the Nerevarine Prophecy, the Nerevarine traveled to the Erabenimsun Camp to have the tribe recognize them as the Nerevarine.[4] 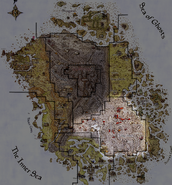 Molag Amur in a map of Vvardenfell.
Add a photo to this gallery

Retrieved from "https://elderscrolls.fandom.com/wiki/Molag_Amur?oldid=2787218"
*Disclosure: Some of the links above are affiliate links, meaning, at no additional cost to you, Fandom will earn a commission if you click through and make a purchase. Community content is available under CC-BY-SA unless otherwise noted.