"The Khajiit homeland is in turmoil as Imperial forces, led by Euraxia Tharn, occupy the city of Rimmen and have begun spreading their influence throughout Elsweyr. Things become more dire as ancient dragons are unleashed upon the land with devasting machinations all their own.

As new conflicts emerge in the ancestral home of the Khajiit, so too does the next expansion for The Elder Scrolls: Legends with Moons of Elsweyr!"[1]

Moons of Elsweyr adds over 75 cards to The Elder Scrolls: Legends, including a host of Khajiit cards across all five attributes alongside their signature keyword, Pilfer. Additionally, the Moons of Elsweyr expansion updates Legends with new in-game music tracks, preconstructed Theme Decks, card mechanics and playmat.

The game adds new gameplay mehanics. Cards with Wax and Wane enter play with one of two abilities dictated by the "waxing" and "waning" phases of the moons. These phases change at the end of each of your turns, so timing is key. With Consume, players can remove a card in their discard pile from the game to gain grisly advantages.

Card back included with the pre-order 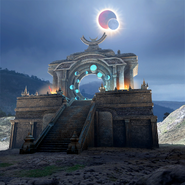 Moons of Elsweyr background depicting Moon Gate.
Add a photo to this gallery

Retrieved from "https://elderscrolls.fandom.com/wiki/Moons_of_Elsweyr?oldid=2965821"
Community content is available under CC-BY-SA unless otherwise noted.