Grandmaster of the Morag Tong

Not to be confused with Camonna Tong.

"The Morag Tong executes writs and performs special duties as the ruling houses direct. Guild members never harm or steal from any brother or sister - regardless of rank. Never betray our secrets or our identities. If you break any of these rules, you must immediately speak with a Master to regain your good standing or you may be targeted for execution."
―Eno Hlaalu[src]

The Morag Tong, also known as the Forester's Guild[2] or Forest Guild,[3] is a guild of assassins operating out of Morrowind. The Empire, during their occupation of Morrowind, sanctioned the guild to perform public, private, and House War executions,[4] and while the Empire opposes murder, the Morag Tong was considered a legitimate means to assassinate a target,[5] with even the Imperial Cult showing respect for the guild.[6]

The Morag Tong are considered to be a powerful threat due to their connection to Morrowind's government.[7] The Morag Tong is believed to have originated under the guidance of Mephala,[1][8] who they also call the "Night Mother" or "Black Hands Mephala".[9] Morrowind Great House Redoran disapproves of the Morag Tong, seeing them as criminals and murderers, and refuses to do business with them.[10] The Dark Brotherhood is the sworn enemy of the Morag Tong.[4]

The Morag Tong looks for people who are able to appear different from who they are. They prefer members to be experienced in illusion magic, light armor, short blade, acrobatics, and sneaking. In order to join the Morag Tong, one must find the Grandmaster, who remains hidden, traditionally in Vivec.[11] Members of the Tong are only allowed to assassinate their target while carrying the proper writ, and have no way to choose which writ they will have to execute.[12]

Harming or stealing from a fellow member of the Morag Tong results in expulsion, with the same punishment being applied for the betrayal of secrets or betrayal of identities. Those who are expelled must speak with a Master of the Tong in order to regain their status, or risk being targeted by a writ.[13] Murdering civilians is seen as dishonorable and incompetent, while killing a target is seen as sacred and honorable.[14]

The Morag Tong concerns itself with honorable executions. Writs from as early as the First Era exist, and offer an insight into their philosophies. The early writs provided hints towards where and when the target was to be executed, and also made direct references to Sithis.[15] The Tong executes writs and performs special duties by the command of the ruling Great Houses.[13] Upon retirement, members of the Morag Tong are sent to Vounoura.[15]

Morag Tong assassins, primarily those of Knower rank or above, typically keep an assassination journal, from which the Thralls can learn.[16] Writs are created by the Grandmaster of the Tong, who reads petitions which are sent to him by those who wish to hire their services, if the petition is accepted, a writ is signed.[12]

By tradition, when a new Grandmaster arises, he honorably executes the previous Grandmaster before taking their position.[17]

One of the artifacts associated with the Morag Tong is the Ebony Blade, a weapon belonging to the Daedric Prince Mephala.[18]

Threads of the Webspinner[]

27 belts, rings, shoes and amulets are part of the artifacts of the Morag Tong. They had been lost for a long time during the Third Era, until being retrieved during the rise of Dagoth Ur.[19] They were created during a pact between Sanguine and Mephala, being given to the members of the Morag Tong, but the Dark Brotherhood stole them.[20]

Morag Tong armor is made from chitin, leather, and other materials gathered from animals. They form a very distinct outline for the assassin. Their weapons are often in the shape of a crescent.[3]

The Morag Tong is believed by some to have found its origins alongside the founding of Morrowind, as during the early days of Resdayn the province was rife with assassinations.[15] The Tong was founded to prevent violence, through keeping House politics from escalating into House Wars.[12]

During the First Era the government of Morrowind officially sanctioned the Morag Tong to operate within the province.[12] During the Four Score War, the Morag Tong was responsible for the assassination of both Reman Cyrodiil III and his son, Juilek Cyrodiil, and thus brought about the end of the Reman Dynasty.[21][2] The death of Reman was ordered by the Duke of Mournhold, and despite the attempts of Sotha Sil and Vivec to prevent the assassination from coming through,[22] it did occur.[23]

After the fall of both the Reman Empire and the Longhouse Emperors, the reputation of the Morag Tong was on the rise again, though it was far from the respect they once commanded.[29]

During the Third Era, House Wars were greatly limited through the usage of the Morag Tong, which enabled public peace and rule of law to continue to exist within the province.[30] During the rise of Dagoth Ur, the Morag Tong fought a shadow war against the Dark Brotherhood on Vvardenfell, as well as the cult of Mehrunes Dagon. They successfully killed both the local Night Mother,[31] as well as another leading figure on Vvardenfell.[32] They also assassinated several prominent figures, including Mistress Therana and Baladas Demnevanni of House Telvanni,[33][34] General Larrius Varro of the Imperial Legion,[35] Councilor Dram Bero of House Hlaalu,[36] and various other Great House members.[37][38][39][40][41] A total of four attempts were made on the life of Athyn Sarethi.[42][43]

Little is known about the Morag Tong during the Oblivion Crisis, except that they attempted to assassinate the commander of the Drothmeri Army at Sundercliff Watch,[44] which was commanded by a member of House Telvanni who aimed to overthrow the Empire.[45]

When the Red Mountain erupted during the Red Year, the Morag Tong scattered, vowing to one day reunite.[46] This occurred sometime before, or during, 4E 201, when the Morag Tong was hired by House Hlaalu in an attempt to assassinate Lleril Morvayn of House Redoran, due to the death of Vilur Ulen.[47] The Great House had sent some Redoran Guard to their headquarters in an attempt to kill the assassins, but the guardsmen had failed, and were instead killed themselves. The Last Dragonborn eventually wiped out their presence on Solstheim, by killing the assassins at Ashfallow Citadel, and thus saving Councilor Morvayn.[48] Even so, it did result in writs being signed on the Dragonborn.[49][50]

The seal used on Writs of Execution. 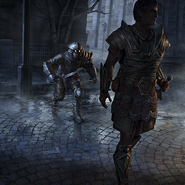 A Morag Tong assassin, about to execute an Imperial soldier.

Deutsch Español Italiano Nederlands Polski Português Русский
*Disclosure: Some of the links above are affiliate links, meaning, at no additional cost to you, Fandom will earn a commission if you click through and make a purchase. Community content is available under CC-BY-SA unless otherwise noted.
Advertisement