For other uses, see Moranda.

Moranda is a large Ayleid Ruin located northeast of Chorrol, almost halfway between Chorrol and Bruma.

Inside the vast area is also a room with harmful gas emitters.

There are pressure plates to open walls to access hidden areas and throughout the ruin are several Ayleid chests and containers with various loot, such as

, potions and one leveled chest. 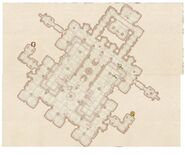 Moranda Abaspania
Add a photo to this gallery

Retrieved from "https://elderscrolls.fandom.com/wiki/Moranda_(Oblivion)?oldid=2939023"
*Disclosure: Some of the links above are affiliate links, meaning, at no additional cost to you, Fandom will earn a commission if you click through and make a purchase. Community content is available under CC-BY-SA unless otherwise noted.