watch 02:48
Wiki Targeted (Games)
Do you like this video?
Play Sound

Morthal is one of the nine major cities of the province of Skyrim, being the capital of the hold of Hjaalmarch. Morthal is a remote, fishing town found on the riverbanks of the Hjaal River. It was supposedly named after the Cyro-Nordic Demigod, Morihaus, who consorted with Saint Alessia of the First Empire.

Despite being the capital of a regional hold, Morthal is situated off the main road that runs throughout Hjaalmarch, being found between the fort-town of Snowhawk, and the mining village of Stonehills. Morthal is a gateway to the Drajkmyr Marsh, which takes a large portion of Hjaalmarch. Much of the marsh is nothing but uninhabitable land, consisting of sunken ruins and caves. To the south of town lies the ancient city, currently known as the Labyrinthian, which looks over the majority of north-central Skyrim. As mentioned before, the region surrounding Morthal is uninhabitable, except for settlements found on the road between Dragon Bridge and Dawnstar. But ruins are found around Drajkmyr, such as the tombs of Folgunthur and Ustengrav.

Morthal itself is a medium-sized town, built at the end of a small mountain pass that connects it to the road. The dirt road that runs through town leads into a stone bridge that leads to the lumber mill and the Drajkmyr Marsh. Morthal is situated on an off-path river from the River Hjaal, which starts from the Whiterun Hold and ends around the Karth River, where it meets the Sea of Ghosts. Along the primary path is the seat of power, the Highmoon Hall, a typical Nordic Longhouse for the Jarl. Roads that go off the main street are wooden boardwalks where fishermen lay their boats, or just fish right there. Most homes are built on small plots of land that are connected to the sidewalk. Most of this is found in the east of town, while a minor part is found on the west side, where the residential inn, the Moorside Inn is found.

The Kingdom of Western Skyrim

During the reign of the Akaviri Potentate, the province of Skyrim was ruled by High King Logrolf, who was a close ally to Versidue Shaie but was assassinated in 2E 431, along with the decline of the Second Empire. But the process for the next High King would bring controversy. Naturally, Queen Freydis of Windhelm, Logrolf's daughter is to be named the High Queen, but even then, people were skeptical about this, with Jarl Svartr of Solitude claiming that she is an illegitimate heir to the throne, and that a Moot must be called to determine another High King. In the end, the Moot had chosen Svartr as their High King, even though the Crown of Verity, the deciding factor for High Kings since Olaf One-Eye, had chosen Freydis. This caused a Schism in Skyrim, splitting it into an Eastern and Western Kingdom, with Svartr as the High King in the West, and Freydis as the High Queen in the East. The city-state of Morthal and the entirety of Hjaalmarch Hold join Svartr in the Western Kingdom.[4][UL 1]

The Clan Axe-Bearer; the Keepers of the Razor

The Clan Axe-Bearer from Morthal were among the original members of the Keepers of the Razor, one of the militia groups that were created in the aftermath of the Oblivion Crisis, in the effort to destroy the Mythic Dawn. The group came into possession of Mehrunes' Razor sometime after the failed expedition to Varsa Baalim conducted by Frathen Drothan. The three broke the enchanted dagger into three pieces, given to the highest members of the group, one of them being Lenne Axe-Bearer. For roughly eight generations, the pieces of the Razor were up in the air, essentially lost to time. Clan Axe-Bearer was given the Hilt of Mehrunes' Razor. Ever since then, the Keepers of the Razor disbanded, as the wielders of the razor pieces went their separate ways, disappearing all throughout West Skyrim.[5]

During the Skyrim Civil War

During the Skyrim Civil War in 4E 201, the city-state of Morthal was ruled by Jarl Idgrod Ravencrone, who was a Nordic mystic that was said to have visions granted to her by the Eight Divines, regardless of whether it was true or not, she was a very spiritual woman. With the Imperial Legion waging war with the Stormcloaks, Jarl Ravencrone, and by extension, the city-state of Morthal allied with General Tullius at Solitude. Idgrod was, however, uninterested in the Civil War, instead, she was focused on what the world has to offer, much to the dismay of the people. Many citizens of Morthal were worried about the Civil War. The Imperial Legion of Morthal was under the command of Legate Taurinus Duilis, who ruled out of Highmoon Hall, and was a member of the Court of Morthal. Fort Snowhawk was their regional bulwark.[6]

The case of Hroggar & the house fire

In the same year, tragedy struck when the house of Hroggar was burned to the ground, leaving his wife and child amidst the fire. Many were speculative to the incident, implying there was a motive to it since Hroggar stayed with Alva, another woman in Morthal, which he had an affair with. A traveler had arrived into Morthal on the night after the fire, and undergone an investigation. It was revealed that Alva was a Vampire, from the hidden Coven controlled by Movarth Piquine in the Marsh. Movarth attempted to enslave the entirety of Morthal, to which the people took to arms until they wimped out. In the end, the Vampire Coven was killed by the traveler, ending the threat that would have plagued Morthal.[7][8] 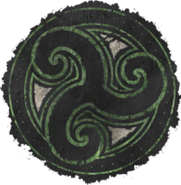 Morthal Executioner in Legends.
Add a photo to this gallery

Notice: The following are unlicensed references. They are not copyrighted by a ZeniMax Media company, but can still be considered part of The Elder Scrolls lore and are included for completeness.
Retrieved from "https://elderscrolls.fandom.com/wiki/Morthal?oldid=3100397"
*Disclosure: Some of the links above are affiliate links, meaning, at no additional cost to you, Fandom will earn a commission if you click through and make a purchase. Community content is available under CC-BY-SA unless otherwise noted.