Not to be confused with Mudan-Mul Egg Mine.
Main article: Ascadian Isles (Morrowind)

Mudan Grotto is a cave and a sunken Dwemer Ruin in The Elder Scrolls III: Morrowind.

It is located southwest of Ebonheart, in the Ascadian Isles region of Morrowind. The entrance is underwater, next to one the southernmost little island. Inside the Nerevarine must swim to pockets of air, while diving deeper, the first area is mostly usubmerged, Slaughterfish and a dreugh are lurking in the depths. A Dwemer ruin and it's door can be found in the completely submerged last section.

This area is not completely flooded, several slaughterfish can be found, and a Steam Centurion is guarding the central section. Around which several corridors lead to the two other sections.

An uninhabited domed room, where many kegs, a chest, the corpse of Peke Utchoo and his dying note can be found, along with various valuable loot and two empty glass bottles.

It is in this room that the unique Dragonbone Cuirass can be found, inside a trapped, level 100 locked, cupboard.

The Nerevarine may collect many unique ancient artifacts for the Museum of Artifacts in Mournhold. One of these artifacts, the Dragonbone Cuirass, is found here.

The following is found as loot from Peke Utchoo, around him, in the chest and the kegs inside the Right tower: 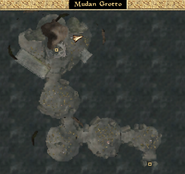 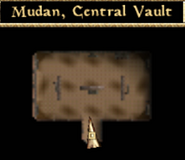 Map of Mudan Ruins in the ESO: Morrowind Cinematic trailer
Add a photo to this gallery

Retrieved from "https://elderscrolls.fandom.com/wiki/Mudan_Grotto?oldid=3155704"
*Disclosure: Some of the links above are affiliate links, meaning, at no additional cost to you, Fandom will earn a commission if you click through and make a purchase. Community content is available under CC-BY-SA unless otherwise noted.