Alik'r Desert, Hammerfell
Shadowfen, Black Marsh
The Mummy is an undead creature that is preserved from a ritual, being found in mausoleums and tombs in provinces such as Hammerfell, Black Marsh and Elsweyr. Mummies are powerful undead, originally very prominent figures in their lifetime. Their bodies are preserved during a burial ritual.

The Mummy were originally nobles and leaders during life, and the process of mummification was practiced by both the Redguards of Hammerfell and the Barsaebic Ayleids of Black Marsh. To the former, the process of mummification was a sacred ritual to the Yokudan God of Souls, Tu'whacca, when the soul had already left for Tu'whacca in Aetherius. The first step is that the corpse is given various blessings of Tu'whacca, as well as, oils and leaves. Second, they must remove all the internal organs before they decay and cause unsightly stains. This is done so by cutting the head and torso carefully so that they could drain the blood and extract the organs without any mess. Then the third step is the removal of the brain tissue, which is done through the nose via hook-spoons. The fourth step is bathing the body in parch-salt to dehydrate it, followed with the fifth step of replacing the lost volume with an inert material to restore places like the face. Next is wrapping the body in linen wraps, coating the linen in Juniper resin, three times. Then there is the final two, which is adorning the body in jewelry and placing them in a sarcophagus, where they would remain since. Mummies are, unfortunately, resurrected either because of a restless spirit or through the process of Necromancy. Sometimes they are only in their linen and jewelry, but they are sometimes kept in their traditional armor and weaponry.[1][2] 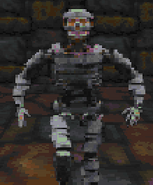 Mummy Wrappings are an alchemic ingredient.

The Shriveled Mummy in Legends.

Lurking Mummy in Legends.
Add a photo to this gallery

Retrieved from "https://elderscrolls.fandom.com/wiki/Mummy?oldid=3115089"
*Disclosure: Some of the links above are affiliate links, meaning, at no additional cost to you, Fandom will earn a commission if you click through and make a purchase. Community content is available under CC-BY-SA unless otherwise noted.