Edit
watch 01:25
'The Elder Scrolls Online' - Murkmire Official Trailer
Do you like this video?
Play Sound

For the DLC, see The Elder Scrolls Online: Murkmire.
Not to be confused with Murkwood.

"At the southernmost extremity of Black Marsh, the region informally known as Murkmire gradually slopes down from the interior uplands of the north until it fades into the ocean. Legend holds that the land once extended much further south before it sank beneath the waves."
―Murkmire loading screen[src]

Murkmire is a region in The Elder Scrolls Online: Murkmire. It is located along the south-central coast of Black Marsh, around the city-state of Lilmoth. The region has different breeds of Argonian and different creatures, including the little-known Naga.[1] It was released as part of its own DLC on October 22nd, 2018 for PC/Mac, and November 6th, 2018 for Xbox One and PlayStation 4.[2]

The Dead-Water Tribe of Naga

An Argonian walking through a swamp

Architectural ruins in a valley

An ancient temple covered in vines

Large trees dotted throughout a swamp

A village in the midst of weakly spread swamp

Murkmire's original location in Tamriel as intended for the adventure zone. 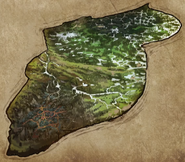 Español Polski
*Disclosure: Some of the links above are affiliate links, meaning, at no additional cost to you, Fandom will earn a commission if you click through and make a purchase. Community content is available under CC-BY-SA unless otherwise noted.
Advertisement