Not to be confused with Murkwood (Quest) or Murkmire.

The Eternal Champion had retrieved the sixth piece of the staff from the Crypt of Hearts, continuing their quest throughout Tamriel. In their sleep, Ria Silmane came to the warrior through a dream, telling them where the next piece is, which was Murkwood in Black Marsh. The Champion had then traveled to the city-state of Stormhold, to get an idea on Murkwood's location, and was directed to Idolan Lancaster, the leader of the Conclave of Baal. Before they were given the whereabouts of Murkwood, the priest gave the Champion a proposition: if they retrieved a stone tablet from the Vaults of Gemin, he will give them what they need. And so, the Champion was able to get the coordinates for Murkwood and retrieved the seventh piece of the Staff of Chaos. The Champion would then set their sites for the province of Morrowind.[2][3] 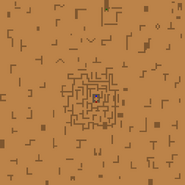 Retrieved from "https://elderscrolls.fandom.com/wiki/Murkwood?oldid=3079115"
*Disclosure: Some of the links above are affiliate links, meaning, at no additional cost to you, Fandom will earn a commission if you click through and make a purchase. Community content is available under CC-BY-SA unless otherwise noted.