"The time of Preparation is almost over. The time of Cleansing is near."
―Doorkeeper[src]

The Order of the Mythic Dawn,[6] also known as just the Mythic Dawn,[7] was a group of Daedra worshippers dedicated to the Lord Mehrunes Dagon. They followed the teachings of Mankar Camoran, who they called the Master. Their holy book was the Mysterium Xarxes,[8] a book which may only be read or touched by Mankar Camoran.[9]

In order to become a member of the Mythic Dawn, one would first have to obtain each of the four Commentaries on the Mysterium Xarxes. The first two volumes are rare, while the Third and Fourth volume are considered impossible to obtain.[10] The first test to show one is worthy of joining the cult is through finding their hidden sanctuary by reading the books.[8] The Third copy, while rare, could still be obtained through special orders,[11] while the Fourth copy could only be obtained directly from a member of the Mythic Dawn.[12] The ones to provide the Fourth copy to a new initiate are known as "Sponsors", and before the book is given, one must be deemed worthy by their Sponsor.[13] After obtaining each of the four books, a new initiate has to find the hidden message within the book. Through combining the first letter of every paragraph in the books, the hidden message is made clear: "Green Emperor Way Where Tower Touches Midday Sun". At the Green Emperor Way, the Tomb of Prince Camarril would reflect a map of Cyrodiil at 12:00, showing the location of the Dagon Shrine.[11]

Upon arrival the Shrine, one is greeted by a doorkeeper saying "Dawn is breaking". By answering "Greet the new day", the first test is completed. Afterwards, the initiate is met by a recruiter. By this point, refusal to join results in being attacked by the members of the cult.[14] To fully complete the process of joining the Mythic Dawn, one has to sacrifice an enemy of Lord Dagon; a priest.[9] Upon doing so, the initiate has officially joined the cult, and becomes an Mythic Dawn Acolyte.

The Mythic Dawn sees Lorkhan as another Daedric Prince, and see Tamriel as his Princedom. As such, they support Mehrunes Dagon's attempt at reclaiming the land, which they consider occupied. Mehrunes Dagon is seen as a liberator, and the Mythic Dawn use the weakness of the Aedra, and the power of the Daedric Lords, as evidence to support their claims. They see the Divines as traitors who murdered Lorkhan, while seeing the Daedra as the true gods of Tamriel. As further support of this claim, it is pointed out how Tamriel has always been a contested ground, a land of Change. Fitting for a Daedric Lord.[15]

Followers of the Mythic Dawn who have arrived in Paradise give their soul to the Magna Ge, as the Magna Ge created Mehrunes the Razor in Lyg. These followers acknowledge that the Magna Ge are all diverse, yet shared one purpose, to create one asset: hope.[16]

The Mythic Dawn cult would find its origins in the early Third Era. The size of the cult at this time is unknown, but it is known that Mankar Camoran wrote his Commentaries on the Mysterium Xarxes when Tiber Septim was alive, in 3E 33, 400 years before the Oblivion Crisis would take place.[17] Other sources imply Mankar was born around the time of the Camoran Usurper, which would make the cult far younger.[18]

In the late Third-Era, the Mythic Dawn sent assassins to murder Emperor Uriel Septim VII and his heirs, Geldall, Ebel, and Enman Septim. Attacks on the Emperor's sons would take place before the attempt on his own life,[19] though all four targets would be eliminated.[20] Not long afterwards one of the chief lieutenants of the Mythic Dawn, by the name of Eldamil, who had also played a role in planning the assassination of the Emperor and his heirs, would open a Great Gate at Kvatch in order to kill the bastard son of Uriel Septim VII, known as Martin Septim. The Mythic Dawn and their Daedric allies overran the town with ease, and sacked it.[21] The Daedra used during the assault were those of the Ganonah clan.[22]

With the death of Emperor Uriel, a prisoner was given the Amulet of Kings, and would bring the artifact to Jauffre, the grandmaster of the Blades.[23] Jauffre knew of Martin's existence and feared he may be in danger, so the prisoner was sent to Kvatch to escort the bastard son to Weynon Priory.[24] Upon arrival at Kvatch the city was already in ruins, and the prisoner would have to play a role in shutting down the Oblivion Gate outside the walls before Martin would agree to come with them to the Priory.[25] While on their way back, the Mythic Dawn had organized an attack on the Priory, and in the confusion, the Amulet of Kings had been stolen from the Blades. Recognising the risk of remaining at the Priory, Grandmaster Jauffre brought Martin to Cloud Ruler Temple to keep him safe from the Mythic Dawn.[26]

The Mythic Dawn would take a more aggressive approach to their enemies going forward. Baurus, a Blades agent, had located a Mythic Dawn agent by the name of Astav Wirich. Astav attempted to assassinate Baurus, but failed due to the aid of the Hero of Kvatch. Baurus had been looking into the agents of the Mythic Dawn in the Imperial City, which resulted in him being targeted by the cult.[27] Astav Wirich had carried a copy of the first volume of the Mythic Dawn Commentaries, however, and this would provide a lead in the case. Tar-Meena, an expert on Daedric Cults at the Arcane University was consulted to learn more about the Mythic Dawn by the Blades.[11] With the aid of Tar-Meena, the Blades discovered the hidden shrine to Mehrunes Dagon of the Mythic Dawn in the Lake Arrius Caverns.[11] Here, the Mythic Dawn would be dealt a significant blow, by losing the Mysterium Xarxes to the Hero of Kvatch. The Amulet of Kings could not be retrieved, however, as Mankar Camoran managed to escape to Paradise.[14]

Through the aid of the Mysterium Xarxes, Martin Septim would slowly discover the means to create a portal to Paradise. The Mythic Dawn, having suffered greatly at the Shrine, would continue their attempts to stop the Blades. Two of the Chosen of the Mythic Dawn were sent out to spy on Cloud Ruler Temple and create a Great Gate at Bruma.[28] Prior to doing this, however, they would open a normal Oblivion Gate just outside the walls of Bruma, which would be closed by the City Watch and the Hero of Kvatch.[29] After having learned the plans regarding the Great Gate at Bruma, the other counties of Cyrodiil were requested for aid. All of these counties were hesitant, however, until the Oblivion Gates outside of their own walls would be shut.[30]

Not long after the Mythic Dawn would create the Great Gate, hoping to overrun Bruma and trap Martin and his Blades in Cloud Ruler Temple.[28] The Blades had counted on this, however, and instead used the Great Gate to obtain the final piece needed to create a portal to Paradise; a Great Sigil Stone. The attempt by the cult to destroy Bruma had failed.[31] After obtaining the Stone, Martin created the portal to Paradise, and the Hero of Kvatch entered to confront Mankar Camoran and retrieve the Amulet of Kings.

Within Paradise, those of the Mythic Dawn who had died had been granted what they had been promised, immortality. Some of these Mythic Dawn members remained optimistic in their ideas of returning to Tamriel as lords, while most were unhappy as they were being tormented by the Daedra on a constant basis.[32] This was done to temper them to rule over Tamriel Reborn.[15] Mankar would be slain in Paradise, and the Amulet of Kings would be retrieved. Paradise was now destroyed, and Martin Septim had the means required to become Emperor.[33] In the Imperial City, the Mythic Dawn made their final attempt at stopping the Dragonfires from being lit again. While Martin was in the White-Gold Tower to be formally recognized as Emperor, the Mythic Dawn had opened Oblivion Gates within the Temple District. While Martin, the Blades, and Legion soldiers rushed to the Temple, they were too late to light the Dragonfires, as Mehrunes Dagon had entered Tamriel. The Amulet of Kings would then be used by Martin Septim to turn into an avatar of Akatosh, and battle Dagon. Coming out victorious, the Oblivion Crisis ended.[34]

During the Fourth Era groups were formed dedicated to wiping out the remnants of the Mythic Dawn. One of these groups, known as the Keepers of the Razor, eliminated the Mythic Dawn members in possession of the pieces of Mehrunes' Razor, which took place around 4E 51. How they obtained the Razor is unknown, as the failed expedition of Frathen Drothan for the Razor in 3E 433 was unrelated to this group.[35] One descendant of a Mythic Dawn assassin, known as Silus Vesuius, required these pieces to complete his collection of Mythic Dawn artifacts in his museum in 4E 201.[36] It is unknown if he was successful or not.

The following are members of the Mythic Dawn in The Elder Scrolls IV: Oblivion. 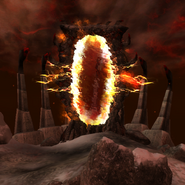 The Mythic Dawn Banner from The Elder Scrolls IV: Oblivion.