Mythic Dawn Robes are an item of enchanted clothing. The outfit is a rare set of robes worn by the Mythic Dawn.

Silus Vesius also wears a full set of Mythic Dawn robes. These can be obtained during "Pieces of the Past" if the Dragonborn chooses to kill Silus.

Inside the display case there are two different robes, one hooded (on the left) and one not (on the right) which may be stolen.

A total of three can be obtained. 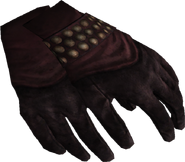 Dragon Priest Mask Glitch
Add a photo to this gallery

Retrieved from "https://elderscrolls.fandom.com/wiki/Mythic_Dawn_Robes_(Skyrim)?oldid=2957195"
*Disclosure: Some of the links above are affiliate links, meaning, at no additional cost to you, Fandom will earn a commission if you click through and make a purchase. Community content is available under CC-BY-SA unless otherwise noted.