Not to be confused with J'Ghasta.

N'Gasta moved to Stros M'kai during Thassad II's rule in Second Era, when the isle was given to him by Mannimarco.[1] Brother Nidal of Arkay mentioned that A'Tor managed to keep N'Gasta at bay, but after his death N'Gasta cast Soulsnare Net over Stros M'kai, to capture any soul who died on the island unless they have performed holy rites or are on hallowed ground. N'Gasta does not live on the main island however, he lives north west on a smaller island that was named after him, the Isle of N'Gasta, in an old wizard's tower. Clavicus Vile grants N'Gasta favors in turn for souls. He also serves the King of Worms who gave N'Gasta the permission to live on the island.[1]

N'Gasta had dealings with the new governor Amiel Richton, and gave him a gift in form of a red diamond amulet within a dragon setting. Cyrus took the job offer to deliver the amulet, which later turned out to be Prince A'Tor's soul gem, on his own agendas. After discovering N'Gasta was in possession of his sister, he went to the island and confronted him. There he found out N'Gasta was in possession of her body and his lord Clavicus Vile was in possession of her soul gem. In order to defend himself, N'Gasta hid in his tower guarded by undead and daedra. Cyrus later reached N'Gasta and killed him, and went to Clavicus Vile's realm to retrieve his sister. N'Gasta morphed into a blue puddle upon death.[2]

Travel to the Isle of N'Gasta and deliver N'Gasta's amulet to Amiel Richton.

Go to the Isle and invade the castle in order to find Iszara.

N'Gasta will throw fireballs at Cyrus, teleporting to a different location around him after doing so. The Flask of Lillandril must be used in order to capture the fireballs and shoot them back at him. He must be hit with his own fireballs 7 times before dying.

Are you familiar with a woman named Iszara?
"Other souls this one has gathered of late have whispered the name."

She's my sister.
"Then count your sister among the living, for she's not cold yet, or this one would know her well."

I'd imagine this island is treacherous to reach by ship?
"Imagine impossible. This one is amused by your imaginings."

You do?
"This one has tallied many of their rebellious souls in the present reign."

What do you think of them?
"What does one think of the gold in one's pouch? Does one judge this coin better than another if both spend the same?"

All the dead are fair curency, then.
"Your wit accounts it well."

How long have you lived on Stros M'Kai?
"How long in legend? This one arrived in Thassad's better years, and was given fair compass of these foul shoals. In that time this one was but a tale in passing, a shiver in riddle."

How long have you been better than a legend, then?
"Since the end of the war. How could this one neglect so rich a harvest? The sea so brimmed with the dead that its tides swelled 'round the world. So this one conjured a net to catch them all, these lost and torn-violent souls. Thereafter this one's presence has been well known here... perhaps somewhat feared as well."

I thought Hammerfell was plagued by necromancy only in the north, where Sentinel lay in similar shadow.
"Do not speak ill, mortal, of this one's liege-lord, the King of Worms, for his grace grants these shores as this one's bountiful hunting grounds."

Is your foul practice not contested by the men of this island?
"Cyrus. What men are left -- this one wonders -- or women of likemind -- for violence against me? They were all slain in the war, and dead now they serve this one without protest. The Mage's Guild whines as is its wont when practitioners of this one's craft challenge their dominion, but the governor shrewdly weights this one's concerns above theirs."

Why is that?
"This one is a better friend than enemy."

How do these souls so collected serve you?
"This one's business in souls doesn't concern you. That the Daedra lords look with favor on a necromancer with a stock in trade... should scarcely surprise you."

Why does the Mage's Guild [sic] [Do not change this to Mages Guild. This misspelled word is how it appears in-game.] hate you? Outside the obvious reasons?
"Such unsubtle gibes little trouble this one, Redguard. As for the guild's enmity... with their archmage dead in the seadust, their impotence breeds spite against this one's masteries."

What happened to the archmage?
"He perished in the war protecting the crown and was lost at sea. I lament that the snare was not then set, for such a soul would have been fit to... cultivate... for nights on end."

He was powerful, then, his archmage?
"Scarcely. He was noted for his trappings, not his trivial skills. His magical artifacts, however... such might even be worth this one's notice."

Has the coming of the empire given you much concern?
"This one is neither not unwary of the empire, nor eager to wear the leash. But the governor has proven himself an honorable man. Thus this one offers him this gift, to encourage his attention to the affairs of the living, leaving me the rest."

The illicit soul-trade. How does it work?
"If mortals knew the power they harbored, and how so unearned, a grace inexplicably given by the outer gods who provide too-plenty and without good guidance. If they knew, they may wise work as hard to keep the within as much as their precious withouts- that easily slipped-bare skin that withers as paper before flame. For that is the truth of it: the body houses that which it cannot ever for long withstand."

Which answers little-
"In short, the soulsnare captures the smokes of silly folk who neglect the sanctity of their souls."

You knew the worthy king, then. Does he rattle in your bag, too?
"He died in Sentinel, not Stros M'Kai, and was therefore outside of this one's catching web, and before this one's time here as well."

Right. Your soulsnare went up during the war, after Thassad was already dead.
"And besides, Thassad would have journeyed to the gods, in any case, for he was keen and prudent: a few good strides and he'd be at the temple door."

What difference would that make?
"This one's snare catches only the heedless, those spirits unprotected by the holy rituals, or those interred in unhallowed ground. So, if you would avoid this one's net, die close by the temple, or far from the island's shores."

You have the island under a spell, N'Gasta?
"A soulsnare of this one's own devising, which gathers lost souls and bears them thither."

For strange and terrible experiments, no doubt.
"This one is comfortable with the trappings of his vocation, even if his victims lack such comfort."

My sister had better not be among them.
"Her being holds as much mystery for this one as it does for you. Enquire elsewhere."

What can you tell me about the governor?
"That he is a generous patron, sending a steady flow to this one even with the war long over. His policies bring profit, and finally by the amulet may his generosity be acknowledged."

What is this amulet that you give to the governor?
"A red diamond this one has found among many treasures, and judges fiting for a servant of the empire, who might fly such symbols on their standards. And the dragon setting is well suited to honor the governor whose command of such a beast gained the victory at Stros M'Kai, and placed Hammerfell in the Emperor's hands."

(Unlocked by They serve you topic)

So the great necromancer is running dog to the lords of hell. Why are they always on the top of the diabolical food chain?
"This one laps at the scraps from no one's table, Redguard. Clavicus Vile grants this one favors with every soul sent his way."

Clavicus...Vile? Please.
"Do not mock that name, mortal!"

Ha-ha. Pray forgive me, necromancer. It just seemed an overly unsubtle name, that is all.
"Daedra were born before stars, mortal. Do you consider that perhaps such names preceded, hence perhaps inspired, the concepts they connote?"

So the temple is your prime competitor in the area.
"Dichotomy to this devil's work. The good brothers of Arkay have a somewhat different perspective on the curency [sic] [Do not change this to currency. This misspelled word is how it appears in-game.] of the soul. They strive to shepherd its return, while this one... prefers to manage flocks for profit. Or should one say, the 'sole' good brother of Arkay, ha-ha... since there is but one left."

What Happend [sic] [Do not change this to happened. This misspelled word is how it appears in-game.] to the Others? (Unlocked by Temple topic)

"One has become raveled in my astral net, having parted from this world not long ago"

How could a temple member be snared when he work in the very haven that opposes you?
"By leaving long the haven, this one speculates... but quite doubtful, it is agreed."

How long ago was this?
"A good three master moons."

I'm curious, N'Gasta. Just how does the soulsnare work?
"You would play the student? Hmm, how quaint; The image of aether-hounds comes to mind, broad shouldered and panting, patrolling the near-here gates of death, alert for the scent of the hapless spirit. But grant me be a far more insidious craftsworm than that: the net's a siren song of semiotics, divining the fading signs of the departed, and crafting from them a lure. A gateway rung with gentle runes of the soul's own manufacture. That soul swarms gratefully into the waiting net, towards heavens woven from the spirit's dim yearnings." 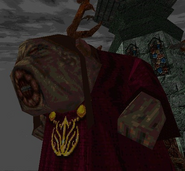 N'Gasta seen from a lower angle

Notice: The following are unlicensed references. They are not copyrighted by a ZeniMax Media company, but can still be considered part of The Elder Scrolls lore and are included for completeness.
Retrieved from "https://elderscrolls.fandom.com/wiki/N%27Gasta?oldid=3076399"
*Disclosure: Some of the links above are affiliate links, meaning, at no additional cost to you, Fandom will earn a commission if you click through and make a purchase. Community content is available under CC-BY-SA unless otherwise noted.